The Seven Seas Navigator
has been sailing for about two weeks after undergoing a renovation,
now boasting an all-new Compass Rose dining room, reception area upgrades and upgraded suites.

Michal Jackiewicz — part owner of
Tillberg Design, which was responsible for the renovations of all Navigator’s
public spaces (the suites were done internally) — said he views the renovation
of Compass Rose as the biggest accomplishment of the renovation.

Compass Rose is Navigator’s
flagship restaurant that seats 384. The space was stripped down to its steel
bones and redesigned, Jackiewicz said.

It’s now a bright, open space that
features customizable lighting (Jackiewicz prefers a shade of warm white) and
handmade crystal chandeliers. The tables are adorned with Versace chargers and
plates.

Jason Montague, Regent Seven Seas Cruises’ president and COO, said, “When I walked into Compass Rose,
I was blown away.”

The reception area also got a
reboot with contemporary design elements. While Jackiewicz said some structural
elements were kept, there is a new stone floor and new fronts and countertops
for desks. He said it has a welcoming effect.

The Navigator’s former smoking lounge
was transformed into the new library. With a faux fireplace, it is meant to
invite in guests, Jackiewicz said. A blank section on one of the walls awaits
some artwork, which Norwegian Cruise Line Holdings CEO Frank Del Rio will
likely pick himself, as he has on so many of the company’s other ships.

The Navigator suite, along with
the penthouse, concierge and deluxe suites (which comprise the largest
selection of suites onboard), were all redone. Structurally, their
configuration is the same, but they feature new headboards, mattresses
and
linens as well as new furniture, carpets and high-definition
televisions. Each room has a new Illy espresso machine.  Category C
suites and
above feature Hermes toiletries; the rest have L’Occitane. 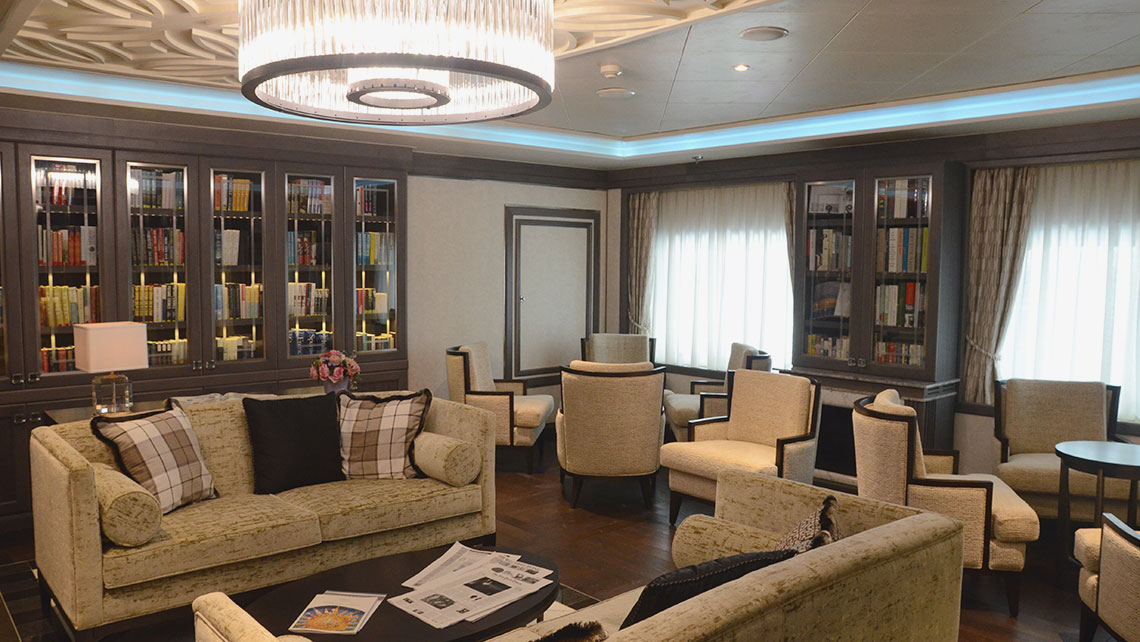 The Navigator’s library is now in the spot previously occupied by the smoking lounge. Photo Credit: Jamie Biesiada

Also, the Navigator is showcasing
some new entertainment. Four singers, two
singer-dancers and six dancers perform a variety of shows, including “The
Great American Song Factory” and “The Broadway Cabaret.”

This summer, the Navigator will sail in
the Mediterranean, followed by South Africa this fall. Next year, it will
embark on Regent’s first world cruise in six years, beginning and ending in
Miami (for a total of 128 days, six continents, 31 countries and 62 ports).

In January, Regent announced a
$125 million refurbishment, which started with the Navigator. The Voyager will undergo renovations
later this year, with Mariner to follow next spring. The program, Regent has
said, will raise its entire fleet to the same style as the upcoming
Explorer, which Regent has touted as the “world’s most luxurious cruise ship.” The Explorer will start sailing in July.

Royal Genies granting wishes on Harmony of the Seas