The creative team behind the entertainment featured on the new Norwegian Bliss faced some unique opportunities — and tough challenges — in putting together the ship’s lineup.

Chief among them? Figuring out how to adapt the Broadway hit “Jersey Boys” for a shipboard environment and audience, which Richard Ambrose, vice president of entertainment for Norwegian Cruise Line, was determined to do.

“I’ve had a relationship with ‘Jersey Boys’ and its Broadway producers for three to four years, just waiting for them to release the rights to us,” said Ambrose in a conversation aboard the ship’s recent preview cruise out of Los Angeles. “When the rights became available to us, we jumped on it, because I knew I wanted to put it on the Bliss.”

But the show’s Broadway runtime of 2.5 hours (including a 15-minute intermission) is simply too long for a cruise ship audience. The Norwegian team needed to trim the show to one act and 90 minutes, while staying true to the style and story of the original, which follows singer Frankie Valli and his musical group the Four Seasons from the band’s formation and success to its challenges and eventual breakup.

In order to accomplish this, he turned to the people who know the show best: its Broadway creators.

According to Norwegian, the “Jersey Boys” show’s creators were closely involved with trimming the production to a cruise-friendly 90 minutes. Photo Credit: Steve Schuff/Norwegian Creative Studios

“When you take an existing show like ‘Jersey Boys,’ it’s about making it work for this audience,” explained Ambrose. “So we go back to the original creators — the writers, the directors — and they literally tweak and edit the show so that the original intent and the overall creative vision is not missed.”

Ambrose gave some examples of this process: “When you go to a Broadway show, there’s a lot of padding, because there’s a costume change here, there’s a set move there. A lot of times, we’re just cutting eight bars out of the music or cutting incidental music out, so it’s about finding [those opportunities]. We also have the benefit of video technology, where a lot of the scenic moves are actually being done by video.”

Aside from these minor changes, the show stays very close to its original elements, including the choreography, set and lighting, according to Ambrose. The Broadway team stayed involved for much of the process, as well, ensuring an end product that everyone stands behind.

“Importantly for me, as someone from the industry, is Des McAnuff [the original director], Sergio Trujillo [the original choreographer] and the original producers came in and said, ‘We’re very proud of this and this, and we need to work on this and that.’ For me, that’s great because it says, ‘We’re engaged and invested in this product.'”

All said, the process took some 2.5 years, but it paid off in a big way. The video screen backdrop keeps the show’s action moving at a brisk pace without being distracting and is used in conjunction with tangible set pieces to create a multilevel, three-dimensional playground that feels like a land-based theater setup. And the other aspects of the show, from costumes to performances, deliver the “Broadway caliber and quality” that Ambrose was dedicated to achieving. 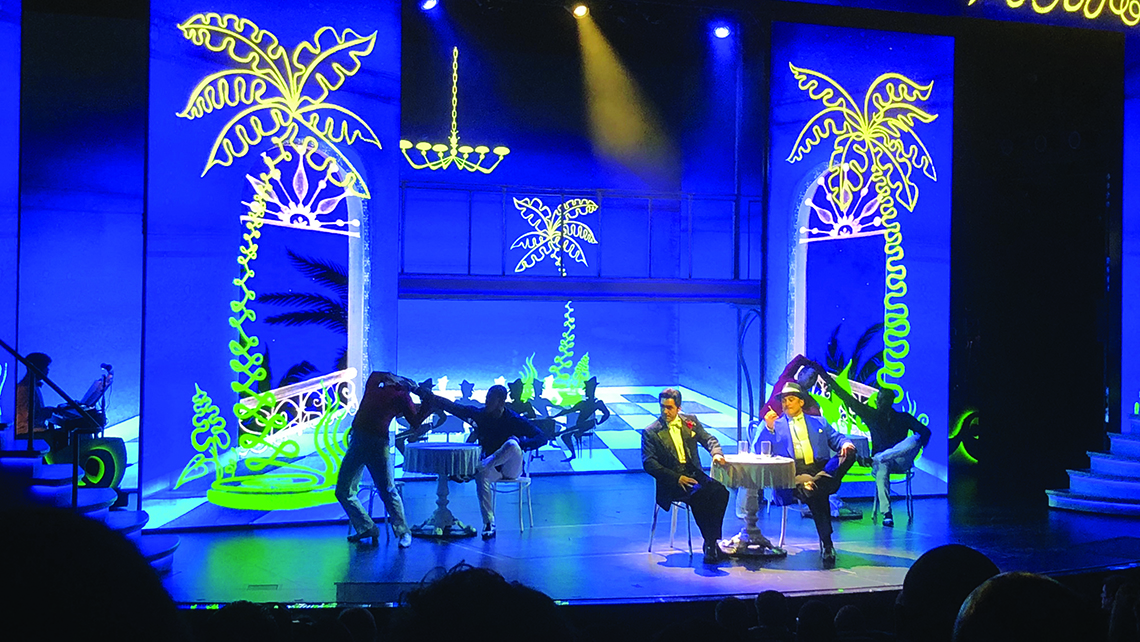 In the show “Havana!” onboard the Norwegian Bliss, a mobster has a scheme to take over the Palace of Lights nightclub, enlisting the fiance of the owner’s daughter to get the family to sign it over to him. Photo Credit: TW photo by Tom Stieghorst

Also requiring a major time commitment from Norwegian’s team was the show “Havana!” The production, which debuts on the Bliss, was created in the grand style of a Broadway musical: new music was written, costumes and sets designed, musical numbers choreographed and staged. The production was workshopped in New York, testing different ideas and reconfiguring aspects that didn’t work.

The end product is a vibrant and colorful musical set in a family-owned nightclub in 1950s Cuba, highlighting both the flashy onstage entertainment and the hidden backstage drama that take place over one memorable night at the venue.

“Basically, I felt that Cuban music was going to have a resurgence,” Ambrose said. “So I went to my friend Warren Carlyle, who did ‘After Midnight’ for us on the Escape, and I said, ‘Want to play again?'”

Carlyle, a director and Tony Award-winning choreographer, is one member of the show’s all-star creative team, which also includes Latin Grammy-winning, Havana-born singer Albita, who wrote the songs, and design duo Ruben and Isabel Toledo, who are responsible for the show’s sets and costumes.

The video technology that helps makes “Jersey Boys” a dynamic viewing experience is on even grander display in “Havana!” The technology serves as an ever-shifting exhibition of vivid colors, tropical patterns, bright lights and sultry shadows that play out across the stage. Together with the flashy costumes (ruffles everywhere!) and impressive, large dance numbers, the show is a feast for the eyes and does a good job of transporting the audience to its time period and setting.

The show’s heavy emphasis on music and dance keeps the production moving along at a brisk pace (its run time is also a little shorter than the “Jersey Boys” production) and affords the opportunity for some fun and creative surprises within the dance numbers.

“From a quality standard, from a creative standard, both these shows are at the same level,” said Ambrose. “What’s great about doing an original production is that I can come up with a creative idea using the same quality parameters that we have for any of our Broadway shows but then create something specifically for our audience — and that’s what we did with ‘Havana!'”

“Havana!” takes the stage on the Norwegian Bliss

Another standout entertainment crafted for the Bliss is the Cavern Club, a live music venue based on the Liverpool club where the Beatles and other legendary rock bands performed.

The club, which debuted on the Norwegian Epic, is part of a partnership with the owners of the original venue and strives to re-create the atmosphere and musicianship on display there over the years.

Onboard the Bliss, the Cavern Club space evokes the feeling of an underground rock club. After entering, guests are fairly closed off from the rest of the ship, creating a sense of intimacy within the room. A small stage is set low to the floor, encouraging interaction between musicians and the audience. Exposed brick and a bar along one wall complete the space.

And then there’s the music itself. Being a bit wary of impersonators, I will admit that I wasn’t sure what to expect from the Beatles cover band. Much to my surprise, once I arrived, I didn’t want to leave, even though the place was absolutely packed with people filling any and every available space in the room. The band members were very talented and clearly enjoying themselves. Their energy and spirit, along with the music, were infectious, and by the end of the set, everyone was out of their chairs, singing and dancing and calling for encores.

“It’s immensely popular,” said Ambrose. “It’s packed every single night. You go in there and you know the music being played, it’s being played well and it’s just about having a great time. It’s been my passion project, and it’s delivered.”

And Norwegian has a few more tricks up its sleeve when it comes to delivering a good time on the Bliss.

Among the additional offerings is “Happy Hour Prohibition — the Musical,” an intimate, interactive show designed for adults. The setting is a New Orleans speakeasy on the eve of Prohibition, and in keeping with the theme, guests are treated to five era-appropriate specialty cocktails during the show. Early response to the production has been so positive that Norwegian has already upped it from running once or twice a cruise to four or five times per cruise since the ship left Southampton, England, according to Ambrose.

“I’m super proud of this product,” said Ambrose. “The team and the company have really delivered at 110% with regard to the variety and quality of entertainment. And I think the guests are going to love it.”

Beginning this month, the Norwegian Bliss will spend the summer sailing to Alaska out of Seattle before a fall season cruising the Mexican Riviera from Los Angeles. In winter, the ship will begin Caribbean cruises from Miami.