ABOARD THE SILVER MUSE — With its ninth vessel, Silversea
Cruises has created a ship in keeping with the rest of its fleet and its
Italian heritage but one that still represents a significant evolution from its
predecessor, the 8-year-old Silver Spirit.

At 40,700 gross tons and 596 passengers, the Silver Muse is
Silversea’s largest vessel. But in the scheme of things it still isn’t that
large, and its capacity represents an incremental 9% rise in cabin count.

The Muse is like a new and improved Silver Spirit, with the
most radical departure being the splitting of the main dining room into two
separate, themed spaces: the Atlantide steak and seafood restaurant and
Indochine, a pan-Asian alternative.

Along with La Terrazza, Silversea’s buffet and evening
Italian concept, they are the biggest dining rooms on the ship.

The Japanese teppanyaki restaurant known as Seishin on the
Silver Spirit has become Kaiseki, while the Stars supper club has been
rechristened the Silver Note and features a Peruvian fusion menu.

Chris Lackstrom, Ensemble’s senior director of supplier and market
development for Canada, ate in the Atlantide on the first night of a shakedown
cruise from Genoa, Italy, and said she had a hard time choosing an entree among
the many selections.

“To me, that’s a sign that the food is pretty good,”
Lackstrom said.

New on the Muse are Speccanapoli, which serves Neapolitan
pizza from ovens on the pool deck mezzanine, and a Hot Rocks tabletop
cooking concept that adds an alfresco dinner option to the poolside Grill
restaurant in the evenings.

The Silver Muse at a pier in Marseille, France. Photo Credit: Tom Stieghorst

For the first time, Silversea is also promoting its All
Around Dining concept, which it began about a year-and-a-half ago on other
ships. It gives diners the option of ordering food from a limited menu around
the clock for consumption in any public space on the ship.

Beyond dining, the Silver Muse offers plenty of competition
for the new ships introduced by rivals in the luxury segment.

Barbara Muckermann, Silversea’s chief marketing officer,
said the interiors of the ship were designed by GEM of Genoa, to reflect a
subdued style of European luxury, “which is about whispering luxury, which
is about subtle colors, it’s not about screaming.”

The predominant palette on the Muse is a beige/brown, which
is the backdrop in stairwells and some public areas for brightly colored
modernist paintings. The monochrome scheme unifies the ship and probably serves
to make it seem more spacious.

It worked nicely in my room, a 387-square-foot Veranda
Suite, where the brown is accented with threads of green woven into the carpet
and drapes and picked up in throw pillows and bathroom accessories.

It works less well in the stateroom corridors, which have no
wall hangings, resulting in a monolithic feel, and in the Dolce Vita reception
lounge, a large, low room that can seem like a sea of brown leather chairs,
taupe carpet and tan marble.

One of the notable features of the Silver Muse is a long
swimming pool that helps lend a sense of expansiveness to the pool deck. A
commemorative book created for the ship touts “an almost extravagant
amount of outdoor space” on the Muse, with the pool area offered as a
prime example. A secluded hot tub in the aft of the pool deck provides a scenic
and cozy place to warm up after swimming in the pool.

The pool deck is also the venue for Preludio, which offers
custom-fitted women’s sandals made on the spot by a cobbler from Capri, Italy.

The one-story theater on the ship, the Venetian Lounge, has
an impressive, wavy design to the ceiling, and in keeping with recent trends is
smaller than the full capacity of the ship. “Argento,” a 40-minute
performance of show tunes and standards, was well performed, and I stayed to
the end.

New to the Silversea fleet on the Muse is the Arts Cafe,
where the plan is to showcase Italian art and culture through periodic
exhibits. It is also the venue for a library of art books selected by London
bookseller Heywood Hill. It seemed a work in progress during my cruise, but it
did become my go-to spot for cappuccino in the morning. 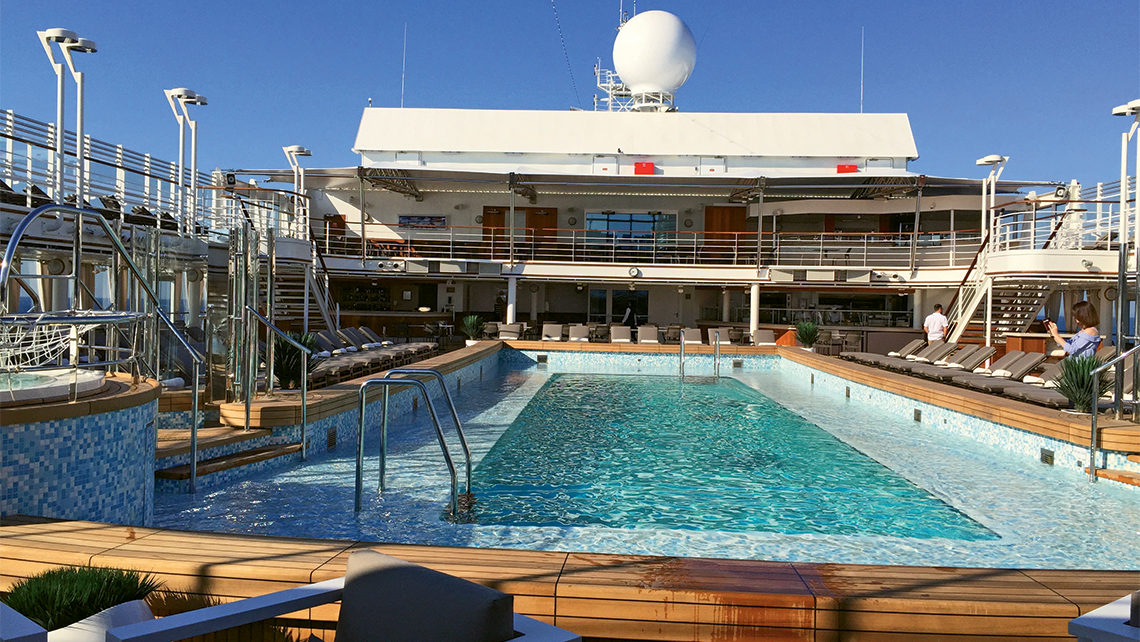 The Silver Muse has several large suites, including a pair
of 1,130-square-foot Royal Suites, a pair of 1,475-square-foot Grand Suites,
three Owner’s Suites and the Balsorano Suite, which has some of Silversea
chairman Manfredi Lefebvre’s personal items and preferences. In its two-bedroom
configuration it is 1,389 square feet.

All of the suites have the spare elegance found in the overall design. In remarks at a reception, Lefebvre said “This ship is made pretty much to what would be my taste. We tried to give a message of deep elegance, but discrete,” he said, ”where you’re not overwhelmed, you feel at home all the time and you can notice the details of our extremely well-built ship.”

Lefebvre traced his taste in part to his father, who
preceded him in heading Silversea. He said the company has options to add three
more Muse-style ships to its fleet and told a story of asking his father the
year before he died what he wanted.

The Silver Lining to Asia’s Travel Recovery Will Be Who Learns the Most From This Pandemic, Says Global Strategist

Lengthened and renovated Silver Spirit back in service