One of the hottest culinary trends on the high seas is
barbecue, a made-in-the-USA specialty that is popping up on several cruise
brands eager to offer new and distinctive culinary experiences.

Carnival Cruise Line launched the movement toward slow
smoking in 2016 when Guy’s Pig & Anchor Bar-B-Que Smokehouse was added to
the Carnival Magic’s promenade deck during a drydock.

The venue was developed in cooperation with Guy Fieri, the
roadhouse TV chef whose Guy’s Burger Joint has become a popular eatery on
Carnival ships.

Last year, it was Princess Cruises’ turn. It added Planks
BBQ to the Caribbean Princess, where for a $12 cover charge diners can create a
“plank” consisting of four smoked meats from a menu of six choices,
including chili-spiced roasted tri-tip and hard-cider barbecued pork ribs.

This year, Norwegian Cruise Line is jumping on the bandwagon
with Q, billed as a Texas smokehouse with a contemporary vibe. An alternative
dining restaurant on the upcoming Norwegian Bliss, Q will serve a selection of
brisket, ribs, chicken and sausages freshly smoked over hickory, oak and pecan.

The Q Texas smokehouse on the Norwegian Bliss will have a contemporary vibe.

The Celebrity Edge, a ship entering service in November, will serve barbecue at the Rooftop Garden Grill. It will have a $45 cover charge.

Q’s pricing will be a la carte, and there will be plenty of
creative sides, such as baked sweet potatoes smothered in pecan honey butter
and cinnamon.

The road to smokehouse nirvana has been a long one, in part
because of safety issues posed by the cooking process, and in part because of
the exacting quality standards that authentic barbecue requires.

“We had to bring in officials from Lloyds Register [a
ship design and safety consultancy] and do a lot of evaluation, a lot of study
of the equipment and modifications to the equipment for fire safety,” said
Greg Poplewko, Carnival’s director of specialty dining.

Poplewko worked with Old Hickory, a Cape Girardeau, Mo.,
manufacturer of the high-end smokers favored by Fieri. It took about six months
of modifications and testing before they had a unit that could be brought on a
ship.

“Then we had to make modifications for the health
department standards, because it’s kind of an open area,” Poplewko said.

The smoker uses propane for heat, but burns wood blocks to
smoke the meat. The exhaust is vented through shutters to a hood and is
eventually expelled through the funnel, Poplewko said.

The Pig & Anchor, which is complimentary for lunch, is
now also featured on the Carnival Dream, Vista and Breeze. In April, Carnival
will expand the concept on its new Carnival Horizon by combining barbecue with
beer at Guy’s Pig & Anchor Bar-B-Que Smokehouse/Brewhouse.

Carnival will serve a barbecue dinner in the 138-seat space,
with prices ranging from $4 for appetizers to $18 for a pound of smoked prime
rib. 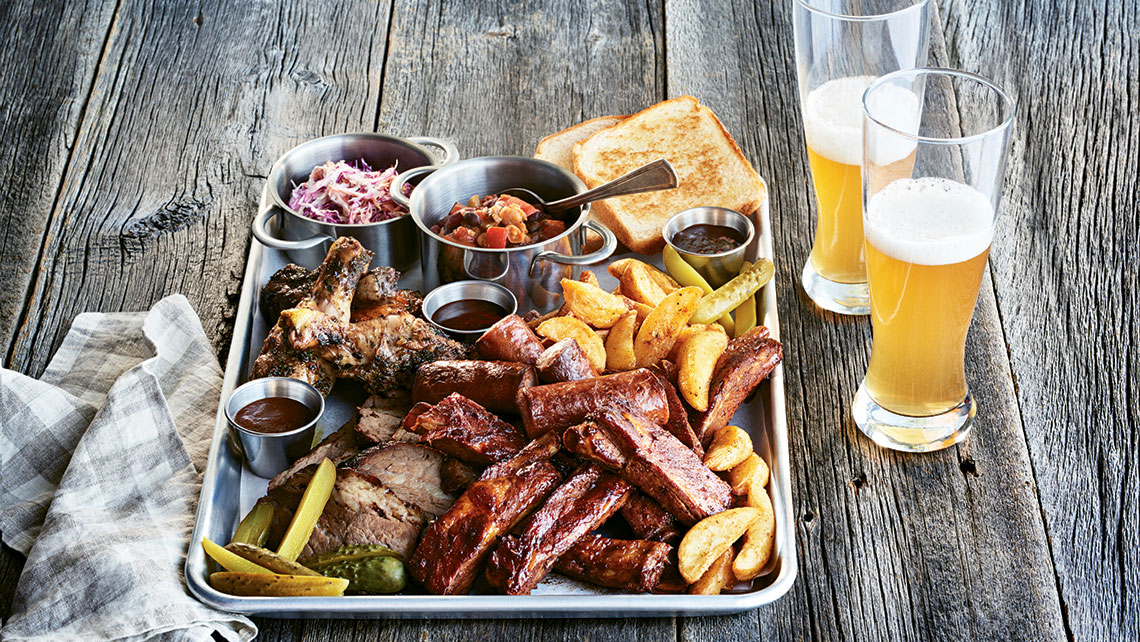 Diners can order a “plank” of smoked meats and sides at Planks BBQ on the Caribbean Princess.

Joe Siragusa, CEO and owner of Plaza Vacations in Kansas
City, Mo., said the barbecue option “definitely adds to the appeal of a
cruise, especially with something as universally appreciated as barbecue. As
long as they keep it at a reasonable price point, then I think it’s going to go
gangbusters, absolutely.”

Planks BBQ, situated on Deck 15 near the Caribbean Princess’
World Fresh Marketplace restaurant, serves a buffet-style lunch and breakfast
at no charge before turning into a barbecue emporium in the evening.

Q, located on Deck 6 of the Norwegian Bliss where the Supper
Club is on the Norwegian Escape, was enabled by a new cooking technique with
which meats can be authentically smoked onboard within safety rules, a
Norwegian spokeswoman said.

While the menu is inspired by a Texas roadhouse, the decor
will be contemporary and urban, providing a different sort of aesthetic than
the cowboy-meets-junkyard style of many barbecue joints.

Pricing for Q will range from $3 for some appetizers to $30
for a platter with four meats and sides.