When Norwegian Cruise Line in 2010 debuted the cruise industry’s first area dedicated to solo cabins, with a lounge and happy hours for their occupants, it launched a new age for the solo cruiser.

More than 10 years on, the industry is entering what might be the golden age of single-occupancy cruising, with a host of cabin styles and ever-increasing ways for lone cruisers to avoid the dreaded single supplement.

Solo cruisers in the coming years will find more cabins with balconies, a style once almost impossible to find; ocean views; and access to amenities like butler service.

Oceania Cruises last month revealed that its next newbuild, the Vista, set to debut in early 2023, will introduce the line’s first solo cabins, and they will have balconies. Those staterooms up the ante not just on amenities but on size: 270 square feet. Even among the newest solo cabins, finding one larger than 200 square feet is difficult.

Lindblad Expeditions’ newest ship, the Endurance, will also offer the line’s first solo cabins with balconies. Previous ships have had solo cabins, but without balconies.

And two new cruise brands are adding solo cabins to the mix.

Atlas Ocean Voyages says that its Solo Suites, to be added to its first ship, the World Navigator, next March, will be the industry’s first solo cabins with suite amenities, including butler service.

“There’s a segment of solo travelers who, while traveling single, wish to enjoy elevated services that comes with suite amenities but are dismayed at having to pay — some could argue be penalized by — a single supplement,” said Atlas president Alberto Aliberti. “With the new Solo Suites … Atlas is catering to that underserved traveler.”

Virgin Voyages will also debut with two types of single-traveler staterooms: One an inside cabin category and one with a porthole view.

John Diorio, associate vice president of sales for Virgin, said the ship’s solo cabins “are designed and priced for independent travelers, and they perform really well.”

He said that research indicated that the brand would attract “a fair amount of solo travelers. Not everyone travels as a couple, and we knew it would be important to provide this offering.”

Oceania’s senior vice president of sales, Nikki Upshaw, said that the line added the cabins based on feedback from both travel advisors and their clients.

“When designing Vista, we incorporated that feedback into every aspect of the guest experience, including the accommodations,” she said. 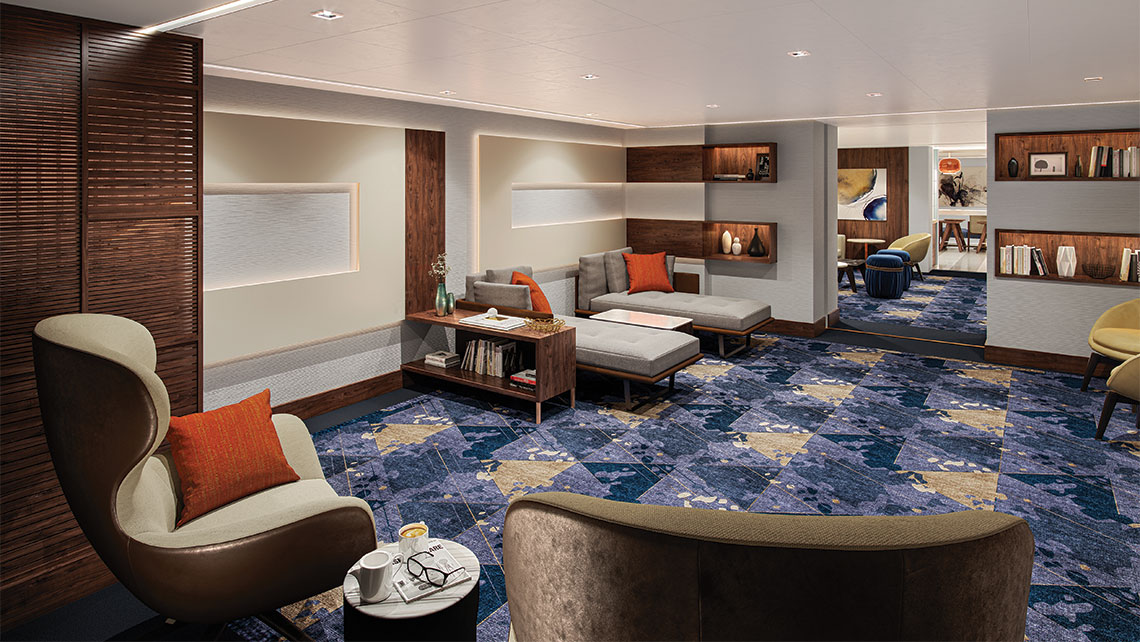 A rendering of the Studio Lounge that will be featured onboard the Norwegian Prima. The ship debuts in August 2022. Photo Credit: Courtesy of Norwegian Cruise Line

How NCL changed the game

No other line has quite matched Norwegian’s revolutionary solo studio complex that launched on the Norwegian Epic. The block of solo cabins grants the occupants access to the Studio Lounge for single travelers to meet and mingle over complimentary happy hours and espresso drinks.

The line now offers the studio area on seven ships, and its newest vessel, the Norwegian Prima, will have it when it debuts in August 2022.

But other lines have jumped on the single-traveler trend over the last decade.

Many of Royal Caribbean International’s newest ships have studio staterooms for solo travelers, some with virtual windows and balconies (LED display screens with live images of the sea and ports) and others with 55-square-foot, open-air balconies.

Cunard Line built single cabins onto the Queen Elizabeth and Queen Victoria and added them to the Queen Mary 2 in 2015, both oceanview and inside. Holland America Line’s newest ships — the Koningsdam, Nieuw Statendam and the upcoming Rotterdam — each have 12 singles cabins, all with ocean views.

Annie Scrivanich, senior vice president of Cruise Specialists, said as more cruise lines either waive or reduce the single supplement, along with more and better solo-occupancy cabin options, there is more interest from single cruisers. She said Atlas’ cabins are particularly compelling in terms of having that level of product in a dedicated cabin for singles, with no supplement, on every cruise they offer.

“The other cruise lines are going to [waive the single supplement] based on their capacity and their needs,” she said.

A more important driver for Cruise Specialist’s solo clients, she said, is being able to tap into hosted groups. The company is seeing a surge in such cruisers booking hosted departures, which enables them to be part of a larger group and have a point person. That is especially true on longer cruises where the solo-travel spike has been particularly pronounced.

“They feel a little bit more support and comfort in terms of traveling so far, and in case something goes awry, that they’ve got someone who’s going to help take care of them,” Scrivanich said. “And then there’s also instant social opportunities for them.”

Cruise Specialists offers its own hosted departures and also books into parent company Travel Leaders Network’s Distinctive Voyage Program, which is always hosted. The sailings offer both onboard and onshore events for the groups.

Ships filling up fast as Alaska anticipates a record year

Floating pier will bring ships back to historical Jamaican port

Royal Genies granting wishes on Harmony of the Seas