VICTORIA, British Columbia — The tsunami warning was a nice touch.

On the first day that delegates opened discussions about tourism and climate change, planet Earth responded with a jolt. Shortly after midnight, sirens blared and cellphones rang across Vancouver Island: WARNING — TSUNAMI: Prepare to evacuate.

The waves from an Alaskan earthquake never materialized, but Canada’s first national sustainable tourism conference felt both cursed and blessed.

Deirdre Campbell, of Beattie Tartan Communications and a conference founder, joked the next morning, “No, we didn’t plan this, but it made the point.”

To wit, Canada made the unusual decision to tackle tourism’s toughest problems while their industry is on the upswing, when life is good.

In fact, Canada tourism has never been hotter. The “good news” headlines are becoming repetitive:

“Best Year Ever for Canada Tourism — 2017 surpassing the previous record by over one million.”

“Toronto breaks all records with $8.8 billion in tourism receipts.”

So why not use this golden era to enact painful measures to mitigate the effects of climate change and the degradation of wilderness or to tackle overtourism, even if it reduces the number of tourists. The last panel was titled “When More Isn’t Better.”

The three-day Impact Sustainability Travel and Tourism Conference was a serious affair, bringing together Canada’s minister of tourism, members of Parliament, provincial officials, mayors and scientists, along with representatives of the tourism industry, including the head of Destination Canada.

Every other speaker warned that tourism could no longer be deemed successful simply by counting the high numbers of visitors and money they spend.

This city, the site of the conference, was ranked the No. 2 small city in the world by Conde Nast Traveler last year, an acknowledgement of its revived harbor, exotic foodie scene, its fancied-up, English-flavored architecture and the newer totem poles rising around the city.

“We’ve had great growth that is already fueling unsustainability,” said mayor Lisa Helps. “Our goal has to be saving the world, one destination at a time.” 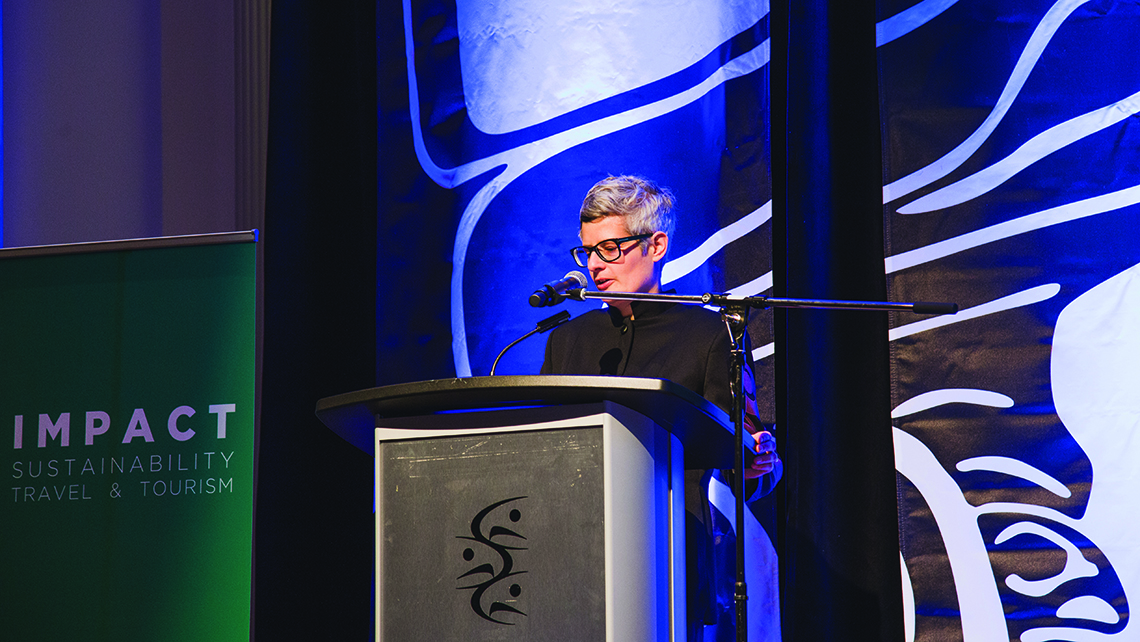 That rhetoric flowed into working sessions in which attendees tried to connect the dots. Everything was open for discussion except one item. David Butler, director of sustainability for Canadian Mountain Holidays, said, “I presume there is no one in the room who doesn’t believe climate change is happening and is caused by human behavior.”

More than a few heads turned toward me, the only American speaker, and I nodded, assuring them I was not a denier.

It was an eye-opening moment to be in Canada talking tourism. Having grown up in Seattle and often trekking to Vancouver and back, I never considered Canada foreign. Now, though, the contrast with the U.S. couldn’t be greater.

Back in Washington, the American tourism industry had raised a different alarm: International visitors were turning away from the U.S. The slide began in 2015 and went into overdrive with the election of Donald Trump.

During Trump’s first year as president, international tourism to the U.S. dropped 3.3%. That translates into a loss of $4.6 billion in revenue and 40,000 jobs.

So the U.S. tourism industry unveiled the Visit U.S. Coalition, an old-school attempt to lure back foreign tourists with inspiring videos portraying the cultural diversity of the U.S.

Coalition members said they were not blaming Trump. It’s the strong dollar as well as mixed messages that have turned off foreigners, who need to be reassured that the U.S. remains a welcoming country in spite of new security and visa policies that might be confusing.

Yet the U.S. Travel Association was among the first to warn that Trump’s proposed Muslim immigration ban “had a broad, chilling effect on demand for international travel to the United States.” Since then other tourism experts have tracked monthly drops in foreign visitors with the president’s disparaging remarks about nations and religions, specifically a sharp drop from Middle Eastern countries and Mexico. Also in the mix is fear of gun violence: Travel warnings by foreign governments about the U.S. have increased with the rise in mass shootings.

Preventing a deeper slide in the visitor numbers tops the U.S. travel industry’s priorities. Yet any discussion of sustainable tourism in the age of climate change is off the table. Trump has pulled out of the Paris climate accord, and sustainability is not a goal.

Canada is looking ahead; the U.S. is treading water.

All of which made the Canadian conference more intriguing. What does it look like when the tourism industry joins government in an attempt to come clean, admit what they’re doing wrong and figure out how they might fix things?

First, by admitting that tourism is a miniscule piece of an enormous global problem but nonetheless has its role in either mitigating or encouraging more damage. 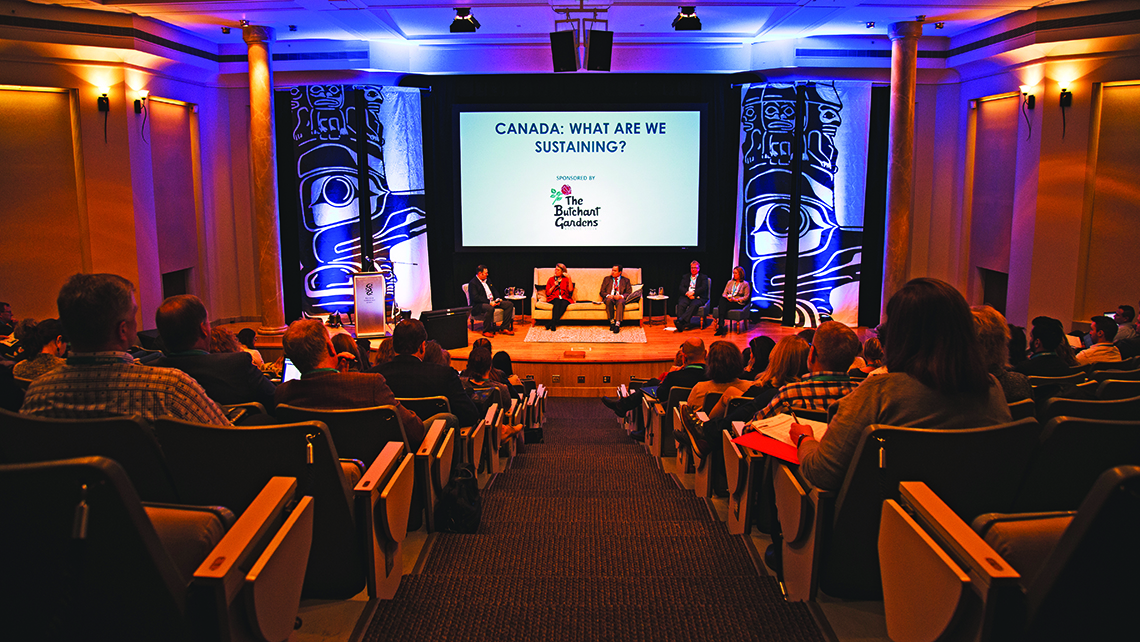 The “Canada: What Are We Sustaining” panel at the conference. Photo Credit: Impact Tourism

Next, the conference invited everyone from across Canada, regardless of political party or philosophy. The primary goal was to connect the dots from unique points of view. How do the summer wildfires in British Columbia and the melting ice in Manitoba and rising sea ice in the Northwest Passage reflect harmful effects of climate change? Then how are they mitigating those problems and still maintaining a healthy tourism industry?

At this stage, most answers were short-term solutions.

• In the mountains of British Columbia, wildlife are herded to new wild pastures away from the flames while underbrush is cut to reduce the spread of fires near structures.

“There is no question we are seeing weather extremes, and our insurance companies are asking how we are preparing,” Butler said of mountain holidays.

• Manitoba employs tourist buggies that travel lightly on the tundra and, in collaboration with Polar Bears International, at least one of those buggies is outfitted with scientific equipment to track and study polar bears.

• The vast Nunavut territory has limited the size of cruise ships to no more than 500 passengers.

“We know we are facing climate change,” said Nancy Guyon of the government of Nunavut. “We have to keep the number of visitors down and follow a comprehensive compact to protect the land, the wildlife and the environment.”

Experts offered simple solutions to chip away at complex problems. They went into great detail about technical problems such as “decarbonizing” travel whether by air, land or sea and inexpensive ways to recycle waste. To eliminate the deadly accumulation of plastic-contaminated rivers, lakes and oceans, a popular first step was getting rid of plastic straws. Tourism could join with community campaigns across Canada to prohibit the use of plastic straws that eventually travel to the sea, polluting the water and killing sea life.

The Canadian tourism industry, with its whale-watching on both coasts and adventure journeys writ large, never questioned that it had a big stake in helping to keep Canada’s waters clean.

Still, this was a tourism conference, and some of the presentations resembled those of any other gathering of destination promoters. They showed lavish videos: northern lights, high-end meals in hipster venues and — the big crowd-pleaser — mother polar bears tending to their cubs. 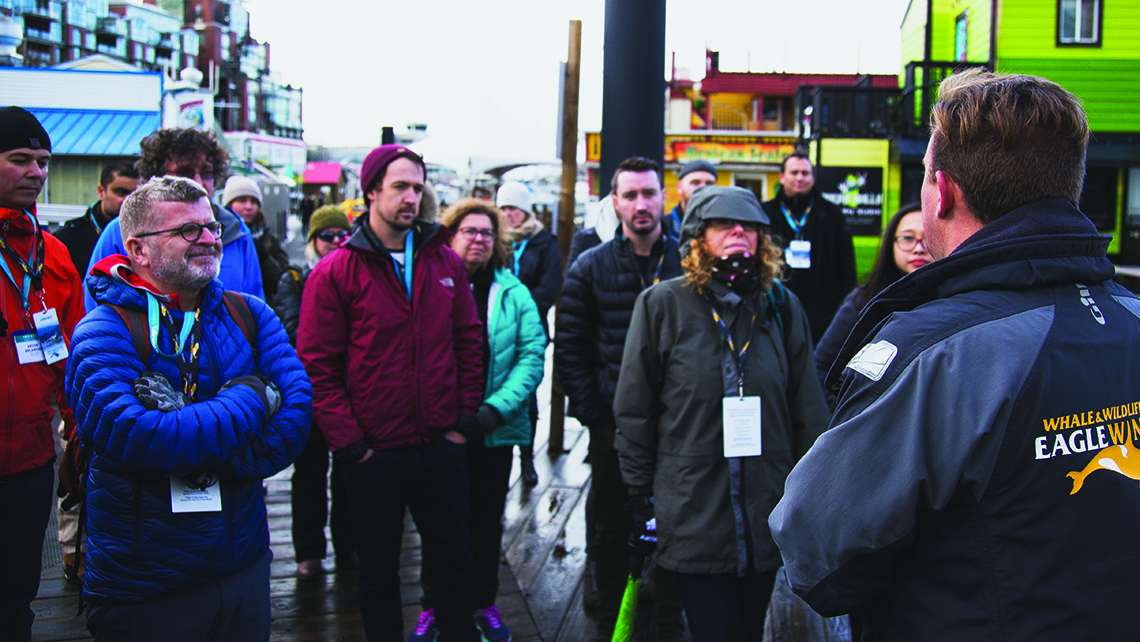 At other times, it felt like a prelude to the climate conference in Paris. Darren Reeder, executive director of the Banff & Lake Louise Hospitality Association, reported with pride that he had reduced the number of overflow visitors at Banff National Park and was completing details of a plan to reduce the number of cars.

Alex Berlyand, a young entrepreneur, offered an answer. He co-founded Parkbus, a nonprofit service from Toronto to provincial parks that transports city dwellers to the great outdoors for as little as $40 each — low carbon with high value for society and the environment.

The scientist Robert William Sandford of the United Nations University Institute was the voice of doom, at first. His whole life is climate change, and in addressing this tourism conference he warned that the heady days of cheap go-anywhere-anytime air travel could be gone in a few decades as the climate deteriorates.

But he followed this with small-step solutions any of the agencies could follow, ending with an appeal to carrying on with “the hard work of hope,” which is also the name of a book he authored.

The essential goal of the conference was to encourage delegates to define what the tourism industry believes is worth sustaining in their destinations or regions.

“What is the value of a wetland?” asked Michelle Molnar, an environmental economist from the David Suzuki Foundation. “Is that worth sustaining? Yes.”

Mayor Helps pointed to the Munro bookstore in downtown Victoria, initially started by Alice Munro, Canada’s Nobel Laureate in Literature, as an example of sustaining a city’s culture.

In that discussion, one aspect stood out as especially Canadian: an emphasis on indigenous or native tourism. 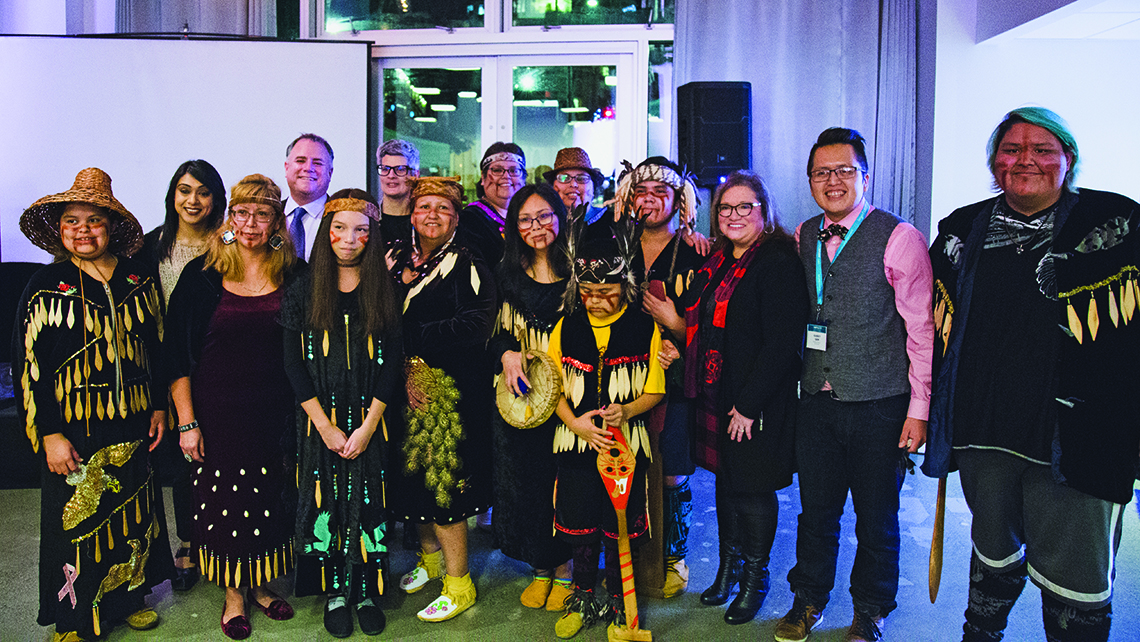 Dancers from the Esquimalt Nation and the Songhees Nation. Photo Credit: Impact Tourism

Native tourism has jumped from a small niche to a major draw, especially in western Canada where it attracts some of the wealthiest tourists interested in authentic culture. The Haida Gwaii islands of British Columbia are the crown jewel of the native destinations. The evocative archipelago was returned to largely native control after multiple lawsuits, and two of its islands are now a Unesco World Heritage Site.

That has caught the attention of the government as well as environmentalists, who have generally supported indigenous tourism groups in protecting and preserving natural resources in the face of demands of extractive industries, especially lumber.

Canada’s tourism minister, Bardish Chagger, used the conference to announce a $1.7 million federal grant for indigenous tourism in British Columbia. It satisfied both the demands of the continuing Truth and Reconciliation Commission of Canada to make amends with indigenous peoples and the view that tourism is a natural fit for reviving indigenous culture while creating profitable businesses.

“We’re long past being tokens on a guided tour,” said Keith Henry, CEO of Indigenous Tourism Canada and co-chairman of the conference. Indigenous peoples, he said “are Canada, and Canada isn’t a young country. It is far older than 150 years. It is an ancient civilization, like Egypt.”

There was an undercurrent, rarely mentioned in public, about the direction of U.S. tourism. Friction between Ottawa and Washington over renegotiating the North American Free Trade Agreement and border issues has filtered down to tourism. Canada is seeing an uptick in Mexican tourists, while Americans seem more wary of visiting.

There was no gratuitous sniping at Americans — in fact, just the opposite. Elizabeth May, a feisty leader of Canada’s Green Party and member of Parliament, said fewer Americans are visiting Canada, and she missed them.

“We can’t allow you to be insular and isolated,” she said to applause. “We love you. We welcome you with open arms.”

Again, several heads turned toward me. I smiled.