ONBOARD THE SYMPHONY OF THE SEAS — I didn’t expect this
ship, the fourth in the Oasis class, to hold many surprises.

Happy to say, I was wrong.

There are some fresh things to see and do on the massive,
228,081-gross-ton ship, the new holder, by about 1,100 gross tons, of the title
of world’s largest cruise ship.

One of the most charming innovations is also the simplest:
The staircase leading up to the Windjammer Cafe sounds musical notes, and the
treads briefly light up when you step on the them. The effect calls to mind the
scene in the movie “Big” when actor Tom Hanks steps out notes on a
giant keyboard laid out on the floor.

Richard Fain, chairman of Royal Caribbean Cruises Ltd., said
the Symphony is the first ship to include such a staircase, the result of an
effort to build a little more zing into a mundane feature.

“We decided we needed to do something to essentially
energize the stairs,” Fain said.

The feature provides a little bit of serendipitous delight,
and passengers can’t quite trust it is happening the first time they experience
it.

Another delight is a modern art installation dubbed The Big
Wonder. The structure is found in the ship’s forward Solarium and functions
like a giant canopy over one of the bars.

Weighing in at seven tons, The Big Wonder is an aluminum
framework in a curving and recurving organic shape, covered with 3,800
triangular pieces made of dichroic acrylic. The material has a subtle,
mirror-like finish and an iridescent quality that changes color with the
viewing angle.

In addition, The Big Wonder is lit from inside with strings
of LEDs that slowly modulate their color at night.

The piece was produced by SoftLab, a New York studio that
specializes in such materials.

On the preview cruise, workers were still installing some of
the individually numbered triangles into the framework. Once in place, the
structure becomes self-reinforcing, like a geodesic dome, Fain said.

It should be noted that The Big Wonder was about the only
item I could see on the Symphony that had not yet been completed. Royal
Caribbean International president Michael Bayley said the line has become more
careful since receiving criticism for bringing the Symphony’s predecessor, the
Harmony of the Seas, out of the yard with multiple areas incomplete.

Other surprises I encountered on the Symphony were not in
the hardware, but in the soft aspects, especially the entertainment. 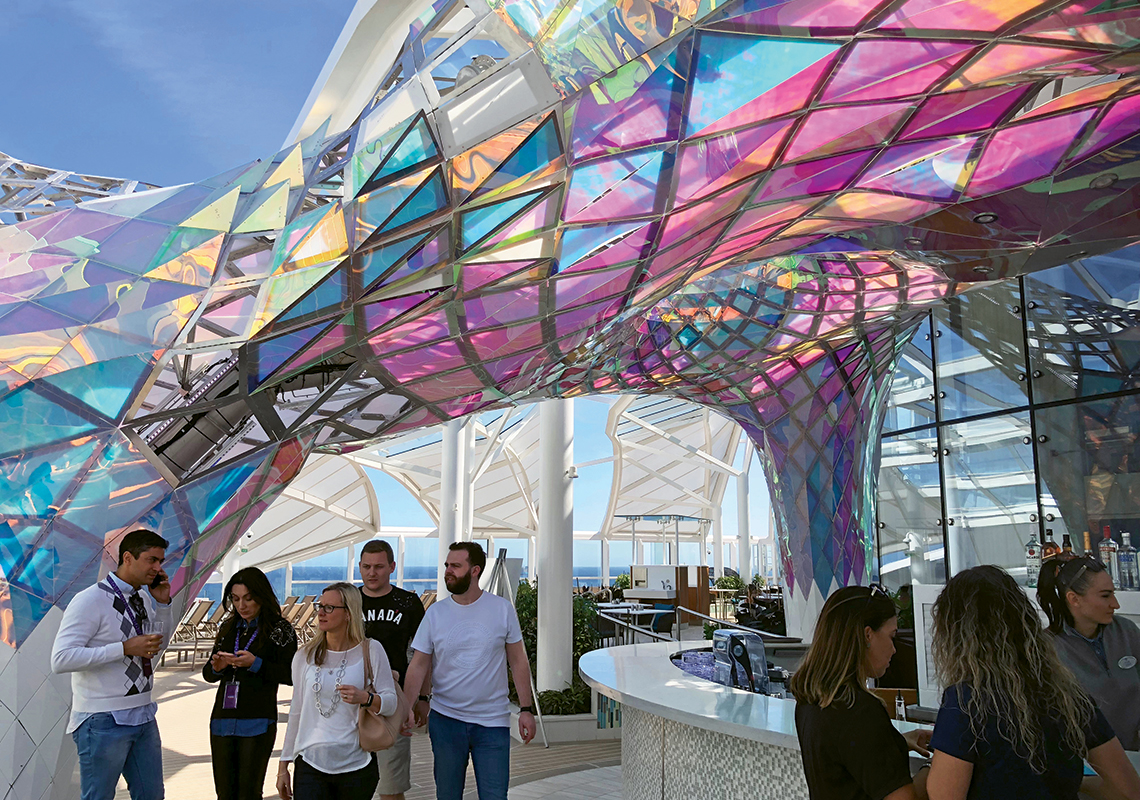 The Big Wonder art installation also serves as a canopy over a bar in the Solarium. Photo Credit: Tom Stieghorst

The most stunning, I think, is the three-minute introduction
to the new ice show, “1977,” which will undoubtedly be publicized on
social media. It involves the simultaneous flying of 48 tiny drones, each
bearing a small light that changes color.

The drones, in seemingly random flight at first, give the
appearance of fireflies on a summer night. Eventually, they fly in more ordered
formations, bopping and buzzing to the Who’s 1967 anthem, “I Can See for
Miles.”

Nick Weir, vice president of entertainment for Royal
Caribbean International, said the drone intro involved the creation of an
internal positioning system in the ship’s Studio B ice rink, similar to
satellite-based GPS.

Signals from the system control the drones and keep them
from crashing.

“They’re all aware of where each other is, so they get
out of each other’s way when they get close,” Weir said. “It’s really
clever stuff.”

The three-minute intro took about a year to build and
perfect, Weir said. He’s particularly proud of the finale in which the drones
form an arch, under which the hero of “1977” makes his entrance. 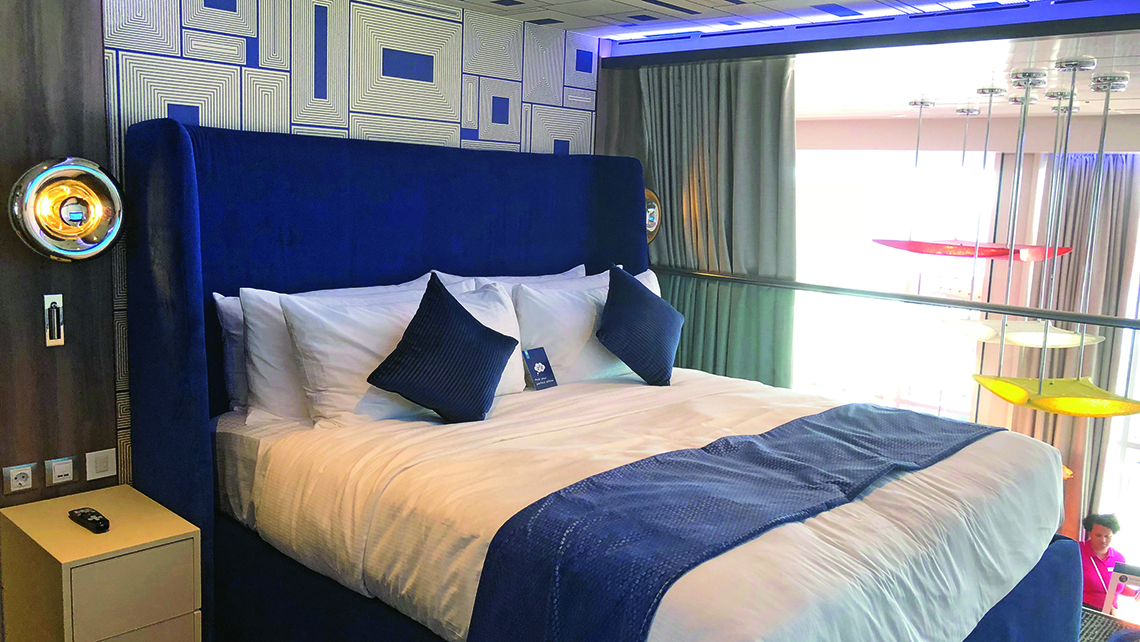 As if that weren’t enough, Royal has also adapted the
projection mapping system from the Two70 lounge on Quantum class ships to work
on the floor of the ice show. A system of six overlapping 5K laser projectors
display images such as a dream-like flowing river on the 2,400-square-foot
Studio B skating rink.

To make the images as distinct as possible, engineers embedded
a thin theater projection screen in the ice.

“You put it all together, and you get a great image,”
said Weir, who used the projection system in Studio B for the first time on the
Harmony.

Another feature, not quite new but getting more of a workout
on the Symphony, is what Weir calls “4D harnessing” for aerialists in
the Symphony’s AquaTheater show, “AquaNation.” The harness enables
the aerialists to move up and down, side to side and forward and back into the
audience space. Weir said the system will be adapted for use in the ship’s main
theater in a future show.

Also bound to have a future on other ships is the Ultimate
Family Suite, a two-level, 1,346-square-foot playhouse suite that comes with
air hockey, pingpong, an Xbox, an 85-inch HDTV system and, last but not least,
a slide that connects the sleeping loft to the lower level.

Outside on the balcony there’s a hot tub and a mesh-enclosed
climbing apparatus. It’s priced at $50,000 a week for a family of four and is
sold out for 2018. 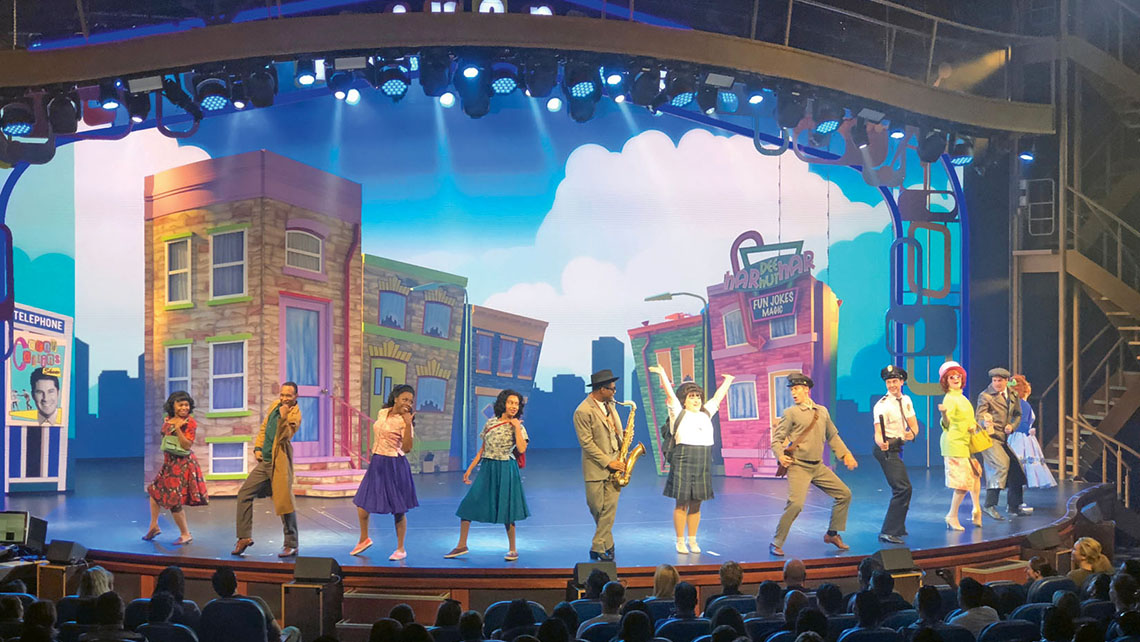 “Hairspray,” first presented by Royal Caribbean on the Oasis of the Seas, has been revived for the Symphony. Photo Credit: Tom Stieghorst

New dining spots on the Symphony include the so-spare-it’s-barely-there
El Loco Fresh, a quick-bite Mexican kitchen with a condiments bar and some
tables on the sports deck. For $39, guests can also eat dinner at the
blue-and-white Hooked Seafood restaurant on a terrace overlooking the enclosed
Solarium Bistro.

For kids (I imagine), there’s Sugar Beach, a candy store
stocked with a rainbow of flavors and colors. Opposite Sugar Beach in the
Boardwalk area is Playmakers, a sports bar and arcade that seems neither fully
adult nor fully juvenile, making it feel betwixt and between.

There remain all the staple features from previous Oasis
ships: the Rising Tide Bar, the Ultimate Abyss slide, FlowRiders, a zipline and
shows, shows, shows. If you can’t find something to do for a week on the
Symphony of the Seas, it won’t be the fault of Royal Caribbean International.

Event Tech Flourishes as Events Recovery Timeline Is Pushed Back

Hotel Contactless Tech: What Will Stick and What Won’t?