Cruising in the coastal waters of North America is starting to gain attention as more companies enter the market and introduce new ships to the long overlooked niche.

Small, domestic ships are plying the bays, sounds and islands in New England, Chesapeake Bay, Puget Sound and the Canadian Maritimes and docking in fresh, less-visited ports of call.

Coastal ships appeal to an older, well-traveled group of passengers seeking a small-ship experience that doesn’t require distant travel and affords easy access to places they haven’t yet seen.

New entrants, such as Haimark Line and Pearl Seas Cruises, are bringing different and larger vessels to the market. And new destinations are cropping up, particularly Cuba, which coastal cruise firms say is ideally suited to their scale and style of cruising.

“It’s definitely growing,” said Debbi Robertson, a AAA agent in Lake Oswego, Ore. “The appeal, obviously, is the fact that it’s a smaller ship, it’s a small footprint with a few passengers, and you can get into nooks and crannies that you can’t otherwise. It’s a much more relaxed and easy way to go.”

Blount Small Ship Adventures vessel the Grande Caribe at Oswego on an Erie Canal itinerary. The line says it is the only overnight cruise ship on the canal.

Coastal cruising is similar to river cruising, except it’s done in saltwater rather than fresh. The ships top out at a little more than 200 passengers, cabins are intimate, getting on and off the ships is a breeze and destination is key.

Each coastal company has a slightly different product lineup, with some mixing river, ocean and lake cruising depending on the time of year.

And an important distinction for most coastal cruisers is that their ships are predominantly U.S. flagged, which allows for itineraries that go between U.S. ports without a foreign stop.

“That’s part of our whole strategy, our boats being U.S.-owned,” said Tim Jacox, president of Seattle-based Un-Cruise Adventures. “In Hawaii with [the ship] Safari Explorer we’re able to operate island to island to island.  In Alaska, the fact that we’re able to operate right in the heart of the Inside Passage, Juneau to Ketchikan, there’s no wasted time whatsoever.”

In a sense, coastal cruising is an offshoot of the U.S. shipbuilding industry. The two oldest players, American Cruise Lines and Blount Small Ship Adventures, both own shipyards: Maryland-based Chesapeake Shipbuilding and Rhode Island-based Blount Boats, respectively. That stands in contrast to much of the ocean cruise fleet, which is built overseas, mainly in Europe. 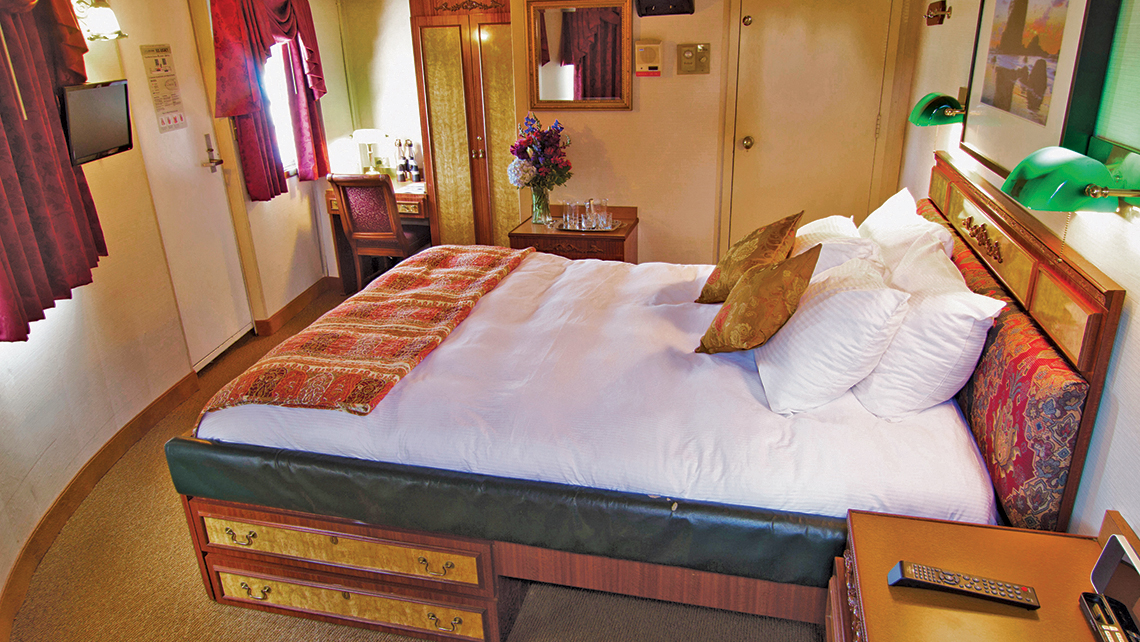 The cabins on coastal cruise ships tend to be small and cozy, like this one on the Legacy.

The ships are different, too. Rather than stress luxury, coastal ships tend to have simpler, more functional decor. Several are built as modern replicas of vintage coastal steamers.

The coastal ships tend to have a lounge, a bar and a restaurant that can accommodate a single seating, along with open space on a top deck for sightseeing. Most cabins range from 150 to 200 square feet.

On some ships, access to cabins is from an open deck rather than an interior corridor. 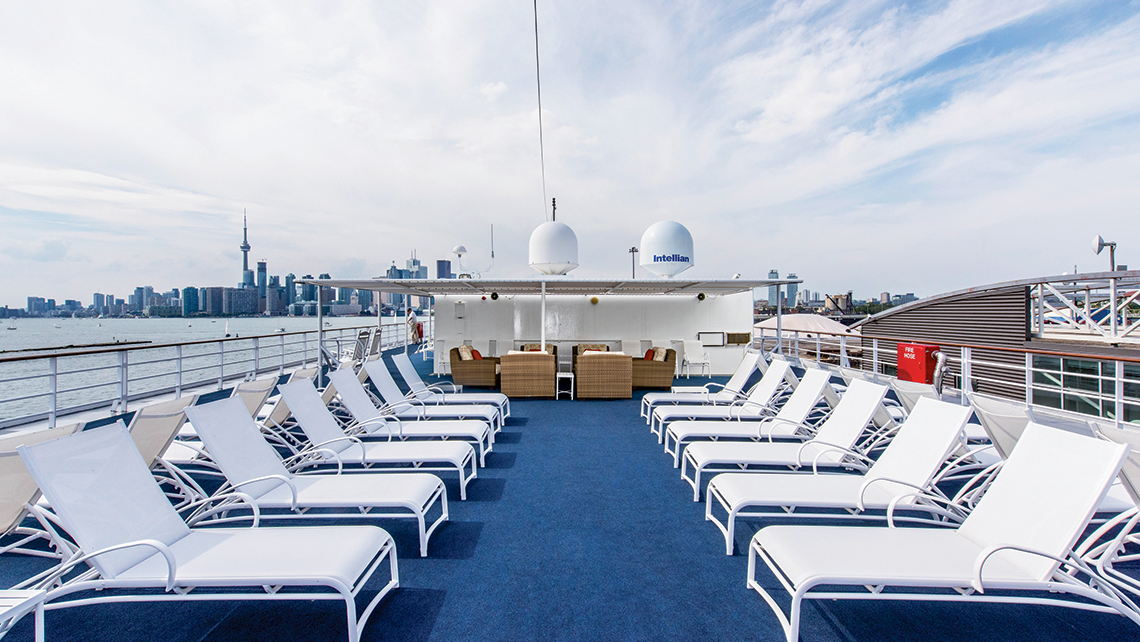 The topside sun deck on the 210-passenger Pearl Mist.

Typically, coastal ships have a shallow draft, which enables ships to access close-in harbors and dock rather than tender in most ports.

Blount Small Ship Adventures has engineered two further advantages: a bow ramp that permits a ship to practically dock on the beach in the Caribbean and a retractable pilot house to pass under low bridges.

Because of that feature, Blount can sail the Erie Canal, along which some bridge clearances are under 22 feet. Nancy Blount, company president, said it is the only overnight cruise ship on the canal.

People who gravitate toward coastal cruising are a distinct breed, according to cruise line executives.

“These people are intrepid travelers,” Markwell said. “They have been everywhere, but at the same time they have been no place close; they have no exposure or limited exposure to destinations of interest in North America.”

“They’ve taken their love of cruising and looked for an application of that concept in North America,” Markwell said. “They say, ‘We cannot physically do long coach rides anymore,’ and beyond that, especially for this aged demographic, the concept of packing and unpacking is not appealing at all anymore.”

Many have exhausted their “bucket list” destinations in exotic places that they waited their whole lives to see. Now, Markwell said, they’re on a second bucket list.

“Their interest doesn’t die,” he said. “It doesn’t wane as they get older. With that in mind, they sort of develop a new list. And that new list seems to be closer to home.”

Where they’re going on coastal voyages are places like the tiny towns on Maryland’s eastern shore; the historical districts of Quebec City or Beaufort, S.C.; or the peaks and evergreens surrounding the San Juan Islands in Washington state’s Puget Sound. 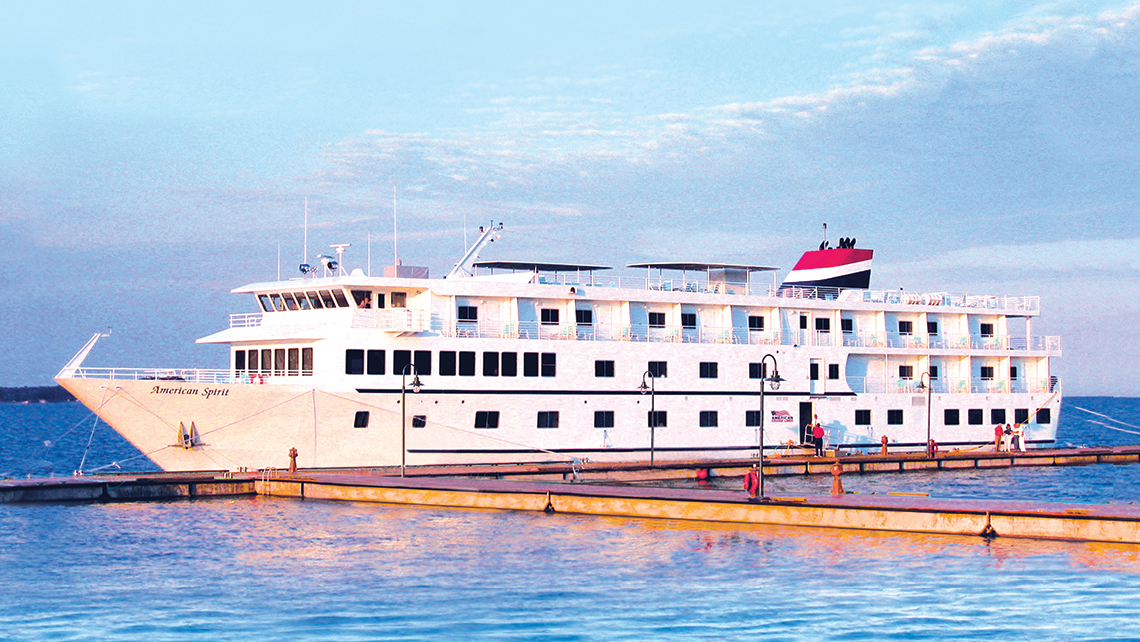 The American Cruise Lines ship the American Spirit has 51 cabins, some with individual balconies.

A classic coastal itinerary is a 15-day voyage offered by American Cruise Lines that sails from Baltimore down through the Chesapeake Bay and along the Intracoastal Waterway to Jacksonville, Fla.

Fares for the cruise, offered in late spring and fall, start at $7,725 and range up to $13,290 for the owner’s suite on one of three American ships: the American Glory, American Star or Independence. All the ships have three decks of accommodations and carry fewer than 100 passengers.

“The small nature of it, it becomes a family on board,” said Judy Roman, vice president of marketing for American and its affiliate, Pearl Seas. “It’s quite an intimate experience, as opposed to typical cruising.”

Passengers form a naturally close bond on such small ships, both with each other and with the crew, coastal cruise executives said. And the crew on U.S.-flagged ships is predominantly American, so there are no language barriers, they said.

Small coastal lines do face competition from bigger, foreign-flagged ships that offer coastal itineraries of their own.

The West Coast itineraries include California ports of call such as Santa Barbara, Monterey, Catalina Island and San Diego. Because the ships are foreign-flagged, they all include a stop either in Canada or Mexico in order to comply with cabotage laws.

With a draft of 25 feet, a larger ship such as the Veendam is more stable on the open ocean but less nimble in reaching small ports than coastal ships that need only six or seven feet of water.

“What we’re trying to emphasize is the navigability of the vessel, because she can get to where larger ships cannot operate,” Markwell said. As an example, he pointed to the Great Lakes, where the Welland Canal between lakes Erie and Ontario limits the size of vessels to 740 feet.

Jacox, of Un-Cruise Adventures, said some of the value in a coastal cruise comes from hugging the coast.

“I think you have part of the population that wants both the security of coastal cruising — they know they’re not going to be out on the open oceans — and also that they’ll have a great vantage point. They’re going to see scenery pretty much all the time.”

At Un-Cruise, many of the shoreline excursions also have an outdoorsy adventure component, including wildlife watching, hiking, kayaking and paddle boarding, which can be done best on small ships, Jacox said. 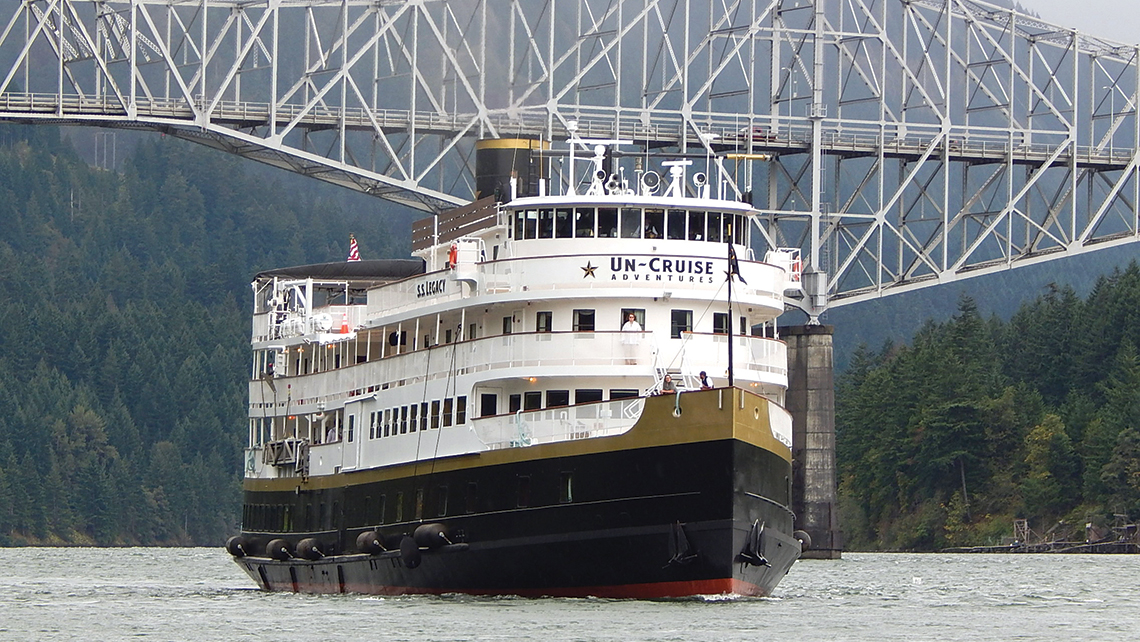 The Legacy, sailing for Un-Cruise Adventures, is a replica of a turn-of-the-century coastal steamer.

Coastal lines tend to put a lot of thought into shore excursions to take advantage of their small-group dynamics.

“You bring 5,000 people into Quebec City, and you feel that. You bring 200 people in, and it just feels comfortable. It’s really easy to deliver unique experiences,” Markwell said.

One example is a visit to a “sugar shack” in Quebec, where maple sap is turned into syrup and candies in a small barn out in the countryside.

Most coastal cruises offer at least one complimentary excursion in each port, plus several optional ones.

Enrichment is another pillar of coastal cruising, and ships typically have a lecturer onboard who is an expert in the history, natural environment or other aspects of the destinations that the cruise visits.

Each line includes alcohol in some fashion. American Cruise Lines offers wine and beer with dinner, plus a cocktail hour. At Un-Cruise, six of nine ships include premium spirits, fine wine and microbrews in the fare.

On a Blount cruise, wine and beer are served with lunch and dinner, plus guests can bring and store their own liquor at the ship’s bar, an opportunity that “our passengers love,” Blount said.

In keeping with its relaxed nature, coastal cruising’s fleet is expanding at a casual pace. The newest entrant, Haimark Line, started sailing in April using the former Cape May Light, a 210-passenger ship built in 2001 for the now-defunct American Classic Voyages.

The only recent newbuild is the Pearl Mist, the sole ship sailing for Pearl Seas Cruises. It features relatively large cabins with individual balconies, a stabilizer, four decks of cabins rather than three and six lounges.

Pearl Seas is the latest line to announce cruises from South Florida to Cuba, which it plans to begin in April.

Cuba solves one of the challenges for coastal U.S. cruisers: where to go in the winter when most of the U.S. is too cold to be an attractive cruise destination. Several lines had focused on cruises in Central America, especially Costa Rica and Panama, where they faced little competition. But with the recent diplomatic opening in Cuba, they’re re-evaluating. 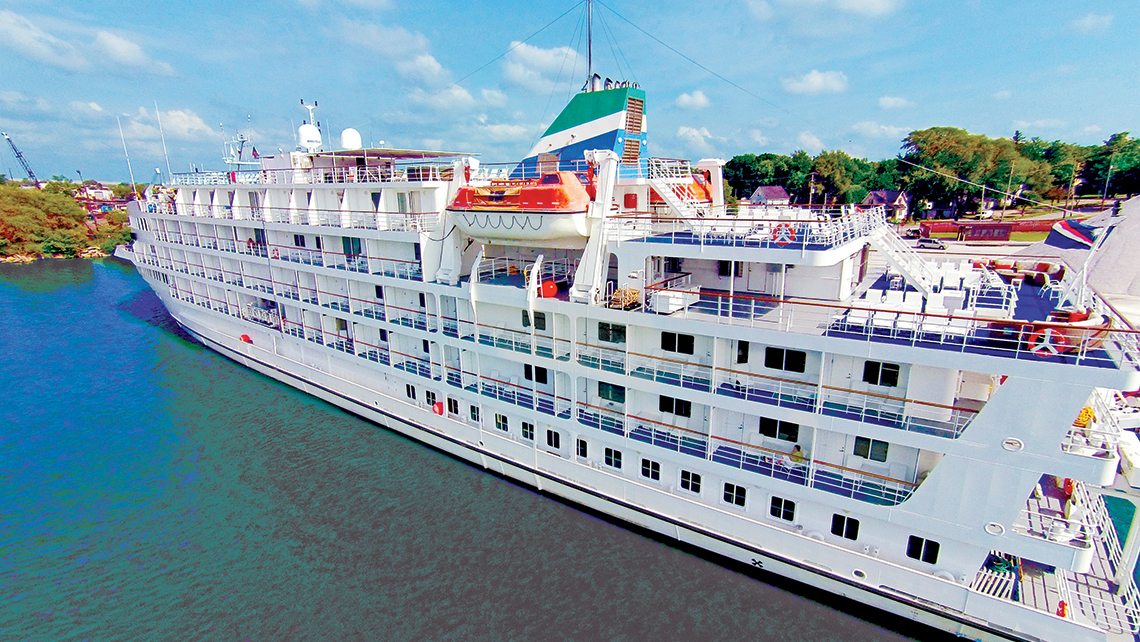 The Pearl Mist is one of the few coastal cruise ships to have individual balconies.

Markwell said an attractive program in the winter is a key to profits.

“It’s important that the ships sail full all year round,” he said. “We cannot make money in the summertime in the Great Lakes to lose it in the winter.”

Haimark also plans cruises from Miami to Cuba starting in February, in cooperation with United Caribbean Lines, which already has Treasury Department approval for ferry service between Florida and Cuba.

Blount, too, has Cuba in its sights, though probably not until 2017. Nancy Blount said that as a U.S.-flagged vessel, there are additional complications to getting Commerce Department approvals.

Jacox said that Un-Cruise Adventures will continue to operate on the West Coast of North and Central America, where it sails one ship in Mexico’s Sea of Cortez from November to March and another in Costa Rica and Panama.

While it shares some similarities with river cruising, U.S. coastal cruising is small even by river cruise standards. The segment in its entirety is only a couple of thousand berths.

“Because there’s very limited capacity, every time we see an opportunity, we grab it,” said Joann Bell, vice president of programming for Road Scholar, a tour operator with an educational focus.

Road Scholar has chartered Haimark’s St. Laurent for two of its four cruises in August in the Great Lakes.

“They have similar philosophies, so they have their own educational content onboard, which just enhances what our product type is,” Bell said.

Road Scholar already sends groups to Cuba on people-to-people trips, so there is synergy in that market, as well. Other operators with a similar focus, such as Smithsonian Journeys, have also placed groups on Haimark and American Cruise Lines.

Because of their small size, coastal cruise ships attract an active charter clientele. Markwell said a third of Haimark’s 15 cruises on the St. Laurent for the balance of the year are charters.

Haimark, which also has river cruises in Europe and Asia, cross-sells U.S. coastal cruises to groups taking those trips.

Markwell said Japan, Australia and France are among the countries that have provided passenger groups for Haimark.

“Because we have grown so quickly and we need that volume, it is important for us to get into those other markets,” he said.

Cuba cruising intact, but growth will be a struggle

One year after Irma & Maria, Caribbean cruising still on the mend