A lot goes through your mind when you’re on a stage across from the Golden Nugget in downtown Las Vegas, singing to a karaoke track of Donna Summer’s “Hot Stuff” in front of a midafternoon crowd as zipliners whizz by above Fremont Street.

What’s that guy in the playing-card sunglasses drinking? Do those pretty greeters outside the Mermaids Casino get hot in their headdresses and feather boas? How does the bridge of this song go?

But mostly, to quote a song I would have much rather been singing: “You may ask yourself … well, how did I get here?”

The answer, for the other four members of my karaoke ensemble, was that they were among the 31 top-selling agents for American Airlines Vacations for 2015, and they were in Vegas in March for the annual scavenger hunt, vying for their share of 1 million AAdvantage miles.

As for me, I was invited to cover the event and was also taking the opportunity to work on some other potential Vegas stories. I was revisiting a destination I hadn’t seen since 1997 and wanted to put eyes on all the changes that have taken place since (CityCenter, downtown’s revival and properties such as our host hotel the Wynn) as well as get a preview of changes still ahead (the massive Resorts World complex and the Speedvegas exotic-car racetrack, to name but two).

As for why I was at the mic, taking a solo on the second verse of “Hot Stuff,” and not snapping photos as the objective observer I’d planned to be … well, apparently that’s not a thing. I was on Team Red, and if that’s how it was going to be, I was in it to win it.

I wasn’t alone in that sentiment. “I’m just letting you know, I don’t stop,” Team Red member Dawn Gray of Jamestown, N.C., a repeat hunter, had proclaimed as the event kicked off a few hours earlier, at the Cosmopolitan. “I don’t quit.”

The titular activity of the scavenger hunt had the teams hurriedly scouring mid-Strip, with tasks including tracking down AA Vacations sales manager Jakki DeFeo at “the original MGM Grand” (answer: Bally’s) and getting a group photo with birds “big enough to support a human being” (answer: the pigeon-shaped metal chairs outside the Aria).

A later activity had us tapping our knowledge of the Shops at Crystals to solve word scrambles like wannabe Robert Langdons (“Christian Louboutin” was a particularly tough one).

For our karaoke event, there was a mad hustle among the teams to gussy up our performances of disco-era tunes: borrowing neon-colored derby hats from the Four Queens Hotel, which hosted our lunch that day; buying beads from the Mermaids girls; choreography, of course.

One group even recruited a ringer for vocal duties on their performance of “Love Train.” “Hmm, did anyone check that guy’s IATA card?” I thought bitterly, the competitiveness rising within me.

I suppose I, and the other travel trade reporters embedded with teams of their own, were ringers of a sort, too. But no one would’ve mistaken our karaoke skills for pro level. Still, I thought I and Team Red duet partner Danielle Oxman of Wilmington, Del., held our own.

The next day proved less hurried but no less competitive. At the SLS, a slots tournament had participants poking furiously at the spin buttons. At the Palms, we were treated to lunch and a penthouse view as we engaged in a team-trivia game about Vegas entertainment. 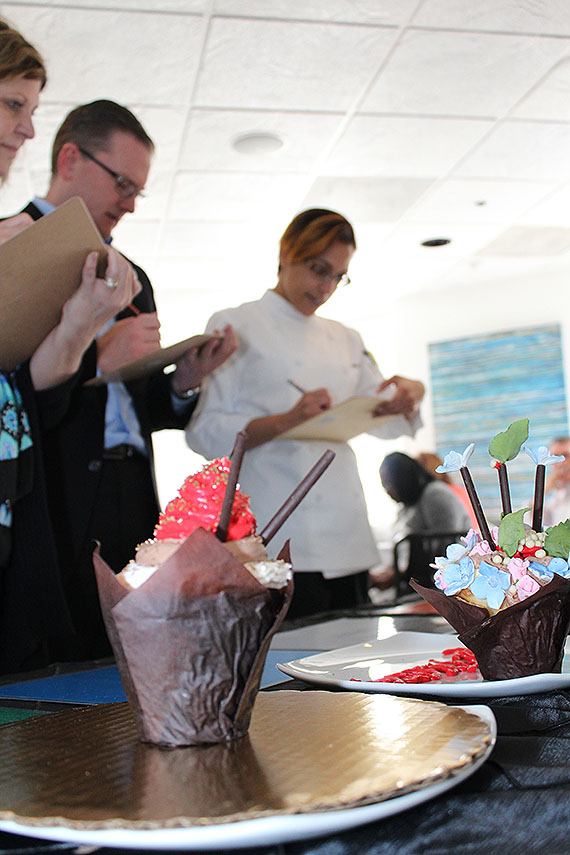 At the recently refreshed Tropicana, we had a cupcake decorating contest. But for Team Red, the ersatz “Cupcake Wars” became more of a cupcake civil war, as team members disagreed about which of ours should be submitted for consideration by the judges.

I made my pick, oblivious to who decorated it, engrossed as I was in my own (ultimately unattractive) creation. Joe Green of Palmyra, N.J., seconded my choice, breaking Team Red’s deadlock. “That’s two men picking,” griped one teammate. Ouch.

But to say it was fruitless would be mistaken. Because, of course, the event was a reward in and of itself, a thank-you from American Airlines Vacations and a show of support for the agent community. And, like me, these agents were in Vegas to learn all about the destination — what’s new and what’s ahead for the ever-evolving Sin City. It was a sentiment I heard from Team Red member Theresa Cooke of Charlotte and other participants, scavenger-hunt winners and losers alike.

Still, I would have liked to help Team Red win some AAdvantage miles. And I really wanted that karaoke prize.

Will Las Vegas Resorts Survive a Year of No Conventions?

How Destinations Are Reinventing Themselves Through Virtual Event Platforms