ABOARD THE NORWEGIAN JOY — Norwegian Cruise Line’s first ship for the China market is also the first in the industry to feature a go-kart racetrack onboard.

At the Joy’s delivery from German builder Meyer Werft last month, I got to race five other drivers around a track full of hairpin turns in go-karts dressed up to look like race cars.

Whenever I got to a stretch of track wide enough to pass another car, I hit the power-boost button on my steering wheel and tried to swerve around it and move ahead. My strategy worked. Once.

The racetrack is exhilarating fun for people who get their thrills from speed and skill instead of other cruise ship attractions that involve falling, flying or splashing from great heights.

The 787-foot track zigzags across two upper decks. After three minutes, the fastest clocked speed wins. I didn’t place, but three minutes was not enough for me. I would have done it again and again. It costs $5 each time, but is included at no charge for guests in the Haven and Concierge premium accommodations.

Competitors in the pit area prepare for a race. Guests in the Haven and Concierge premium accommodations will get complimentary use of the track. Photo Credit: Anne Kalosh

There are more racing thrills in the Joy’s Galaxy Pavilion, the ship’s virtual reality zone. Passengers can climb into an authentic 2009 Williams Formula One race car, strap on VR goggles and experience the sensations of a Grand Prix competition. It’s not a simulator: The car doesn’t move, but you’d never know that from the realistic program playing before your eyes in the goggles.

At another station, four drivers buckle up at individual video monitors fitted with steering wheels, accelerators and brakes to compete against each other on various Grand Prix courses. I rammed another driver, spun out twice and emerged exhausted — and very surprised I hadn’t come in last. The ride can also provide fighter jet and crop duster experiences.

If humanity’s survival were dependent on my zombie-blasting skills in the 7-D room, we’d all be doomed. And I didn’t dare to walk the virtual plank that appears suspended 60 stories in the sky after Simon Murray, Norwegian’s entertainment director of newbuild planning and implementation, said four of 10 people turned back after a step or two.

Far tamer, but fun for kids, are the bumper cars and the Wall of Wonders, where families can sketch sea creatures that drop into an interactive video wall or build a town that — spoiler alert — gets destroyed by Godzilla.

Such games and VR adventures transcend cultures, which is why I wouldn’t be surprised if some of the Joy’s features appear on next year’s Norwegian Bliss, which will sail in Alaska and the Caribbean. The company hasn’t said anything so far about those features.

Otherwise, aboard the Joy there are many East-West juxtapositions. The Noodle Bar sits beside the American Diner. The waterslides tower above Serenity Park, a grassy space for tai chi and yoga. All signs on the ship are in English and Mandarin. 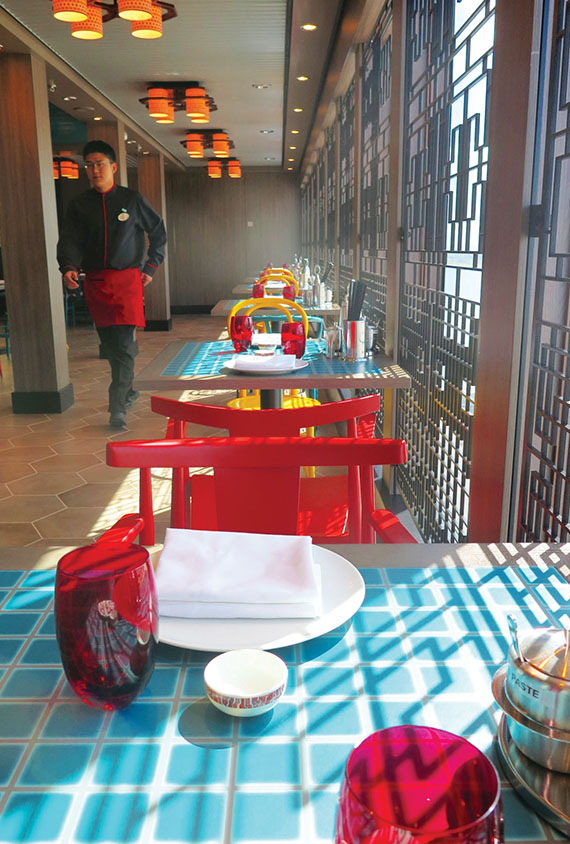 The Noodle Bar is one of the specialty restaurants available. It serves Chinese cuisine. Photo Credit: Anne Kalosh

“The balance of East and West, we nailed it,” said David Herrera, president of Norwegian Cruise Line Holdings (NCLH) China, who called the Joy “the right ship for China.”

Some features of the 167,725-gross-ton vessel look like the Joy’s sister ship, the Norwegian Escape. But others are new, either especially for Asia, like the eight karaoke rooms and the Joy Tea Room, or novel, like the racetrack, the Galaxy Pavilion and an open-air laser tag complex.

Just as Americans enjoy a French restaurant but still like their burgers, Chinese travelers want to taste French and Italian fare but want to have familiar food at least part of the time. “We’re giving them a Western experience, but also things they’re comfortable with,” Sommer said.

In the American Diner, patrons chomp burgers and fries in booths that look like the body of a classic American car. Ketchup and mustard are on the tables. Next door in the Noodle Bar, places are set with chopsticks; the condiments include soy sauce and sweet chili paste, and dishes range from chicken feet to sweetened red beans and mung beans for dessert.

Twenty-eight spots around the ship serve food. Among them are Norwegian standards such as the Manhattan Room, Cagney’s Steakhouse, La Cucina for Italian dishes and the French Le Bistro. Two restaurants have round tables for a family-style hot pot or Korean barbecue dishes. Neptune’s Seafood restaurant is new, and a Godiva Shop replaces Norwegian’s Bake Shop. 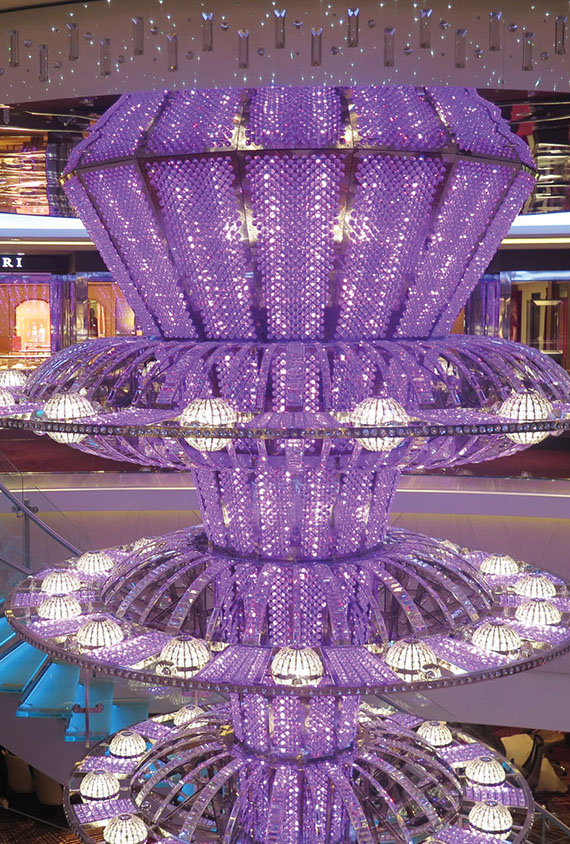 Overlooking the atrium, where a huge, cascading chandelier changes colors from pale pink to magenta, blue to purple, is the Joy Tea Room. Nearby, the Grand Tea Room offers an elegant English tea with finger sandwiches and pastries. The ample duty-free shopping area features brands such as Cartier, Bulgari, Omega, Ferragamo and Versace. Starbucks coffee is brewed in the atrium.

There are four casinos, including a VIP casino, and within the Haven a VVIP casino. A different show will be staged nightly in the Joy Theater, including the lavish “Paradis,” with dancers in feathers and sequins.

The Joy can accommodate 3,883 passengers. The family staterooms that sleep up to six have virtual balconies that display real-time projections of the outdoors.

There are more premium accommodations than on the Escape. The Haven has a bow-facing Observation Lounge featuring 180-degree views, a first for a Norwegian vessel. Also new is the Concierge level with more than 100 large balcony staterooms and a spacious Concierge Lounge that spans the front of the ship.

The Joy will be deadheading to Asia with stops for previews and events leading up to its June 27 naming in Shanghai by Chinese pop star Wang Leehom.

The ship will sail short cruises from Shanghai and Tianjin for Beijing.

Uttarakhand weather to take a turn; rain, snowfall predicted in many regions

Get aboard Japan’s new Pokemon-themed flights and buses