Miami’s billing as cruise capital of the world was endangered 10 years ago by the rise of Port Everglades, but recently PortMiami has been adding passengers and ships at a steady rate.

MSC Cruises, Disney Cruises and Virgin Voyages all have plans to build terminals and raise their profiles there.

Royal Caribbean International just put the biggest cruise ship in the world, the Symphony of the Seas, in Miami and is poised to begin three- and four-day cruises from Miami on bigger ships than in the past.

All of which begs the question of just what there is to see and do in Miami before or after a cruise.

Not that long ago, Miami’s tourist appeal was epitomized by Hialeah Park racetrack, Coconut Grove and the Fontaine-
bleau Miami Beach.

However, more than a half-dozen new districts have been added to the mix around Miami, including South Beach, Wynwood, MiMo, the Design District, Midtown and Brickell Avenue. The Little Havana area, which once offered little beyond the Versailles Cuban restaurant, has suddenly blossomed.

The venerable Joe’s Stone Crab, which opened in 1913, remains one of the best Miami Beach restaurants.

Here’s a look at some of the places to stay, things to do and spots to eat in the Miami area, with a focus on neighborhoods that are both ascending and convenient to the port.

Among the new attractions built in Miami in the past decade, few could be more port-friendly than the Perez Art Museum Miami (PAMM) and the Frost Museum of Science. Both sit along PortMiami’s western turning basin, with direct views of cruise ship row.

The $130 million PAMM provided a first-class building designed by Swiss architects Herzog & de Meuron for a collection of nearly 2,000 works. The $275 million Frost includes a planetarium and an aquarium.

Also in the vicinity are the Adrienne Arsht Center for the Performing Arts (opera, symphony, Broadway) and American Airlines Arena, home to the Miami Heat basketball franchise as well as being a big concert venue.

The wildlife attraction Jungle Island relocated in 2003 from Pinecrest to Watson Island, just across from cruise ship row.

Two other attractions worth considering, but a little farther afield, are Vizcaya, the winter mansion of the late International Harvester heir James Deering, and Fairchild Tropical Botanic Garden, a beautifully landscaped, 83-acre sanctuary with one of the top collections of palms, cycads and tropical fruit trees in the world.

Perhaps no area has changed more rapidly in Miami than the former Brickell Avenue financial district, which is now a 24-hour live, work and stay area after the mushrooming of dozens of high-rise condos in the 2000s.

There are plenty of other restaurants, bars and neck-bending buildings in the area just south of the Miami River, some in the Mary Brickell Village complex. If the 263-room East is too rich ($438 for a Tuesday in March), consider the relatively new Aloft Miami-Brickell, where the same night is $287.

For dinner, check out the River Oyster Bar (650 S. Miami Ave.), which has been serving ’em up in a refined atmosphere for decades. Boulud Sud Miami in the JW Marriott Marquis is another option. 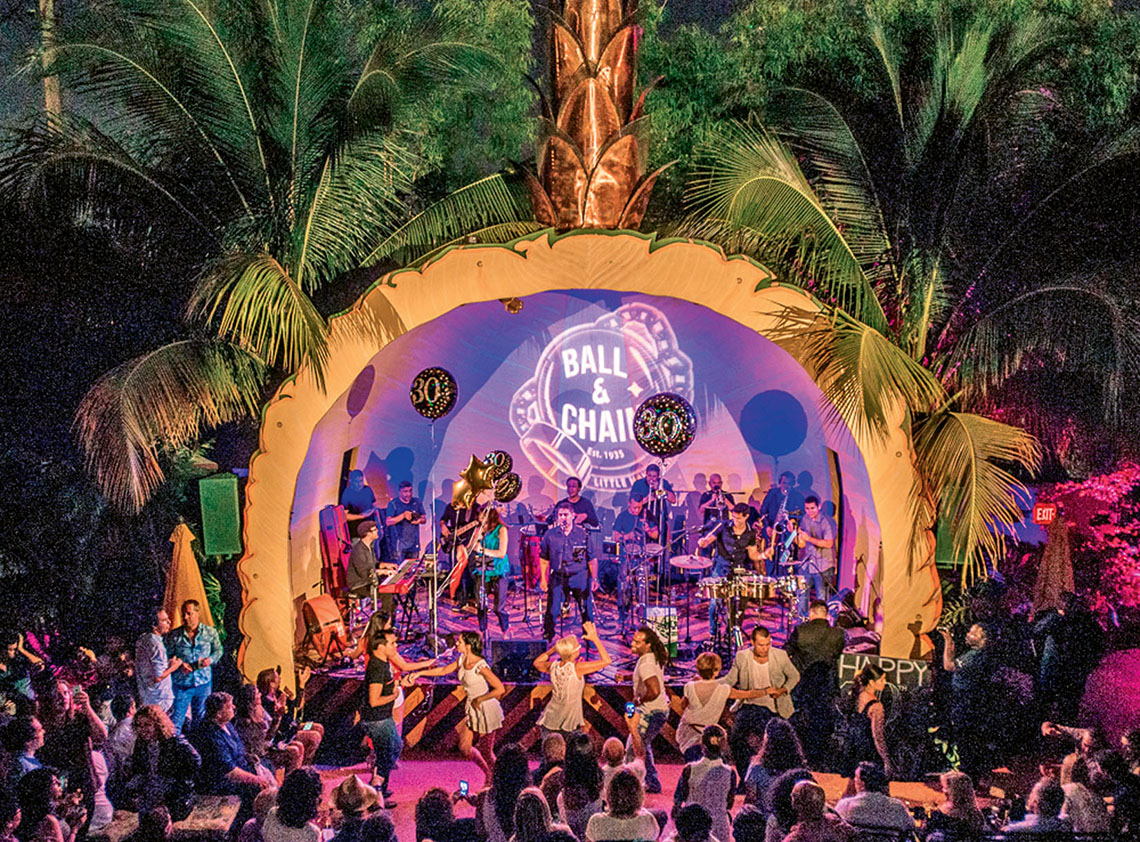 Another neighborhood that’s moving up on many tourist lists is Little Havana, centered on SW Eighth Street (aka Calle Ocho). One cluster of attractions around 15th Avenue is anchored by the Ball & Chain lounge. Though it has a pedigree as a roadhouse that dates back to the 1930s, the Ball & Chain was modernized several years ago. It kept the ambience but added authentic cocktails and a backyard patio with a pineapple-shaped band shell.

Next door is the Azucar Ice Cream Co., which features tropical flavors. Across the street is the Tower Theater, an art deco-era cinema being programmed as an art house by Miami Dade College. 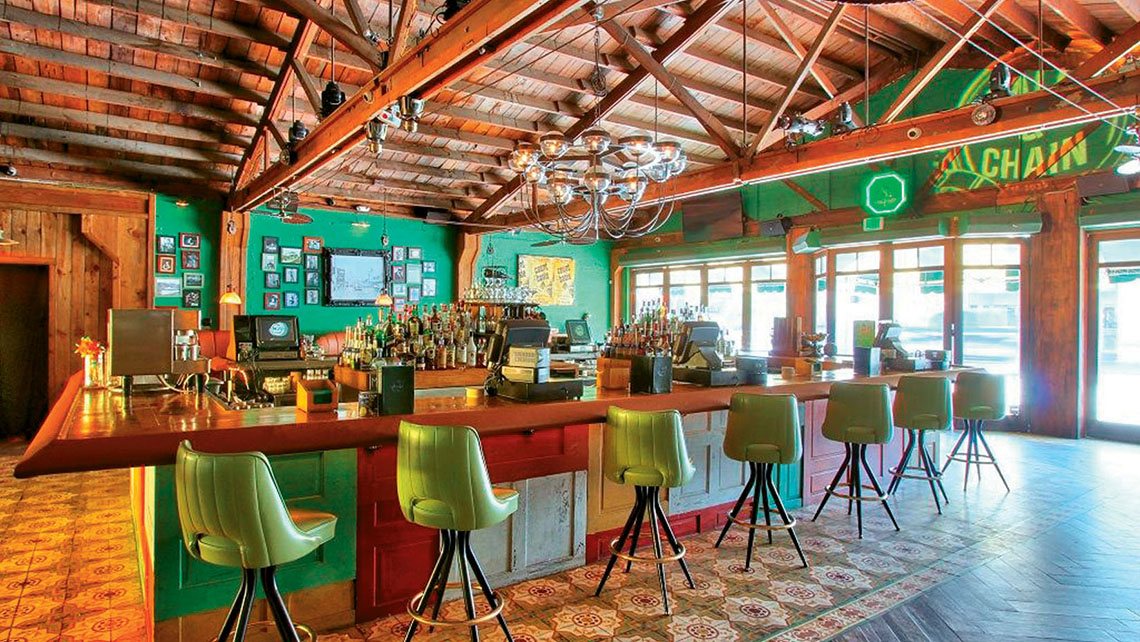 The Ball & Chain lounge’s interior. The lounge dates to the 1930s.

South Beach and beyond

Finally, South Beach and its extensions to the north remain a vital area even after 30 years of redevelopment. An area getting some fresh attention is Collins Park, just north and east of the newly reopened Miami Beach Convention Center.

“It’s like finding a secret room in your house you didn’t know was there,” said a recent Miami Herald story on the neighborhood.

While several hotel reconstruction projects are underway, one that is complete is the restored Plymouth Hotel (336 21st St.), where rates start at $228 for a Tuesday in March. The 110-room, art deco hotel was stylishly redone and is part of the Small Luxury Hotels of the World group.

And what better way to be stylish than to tour Miami Beach in a vintage convertible? Both Antiquecarcitytour.com and Americandreamtourmiami.com will provide you with one. American Dream lists prices from $154 for an hour to $525 for a half-day.

When it comes to dining, the choices have been augmented recently by the opening of Lincoln Eatery (723 Lincoln Lane), a food hall that puts 16 novel concepts under one roof.

Still, the oldest restaurant in Miami Beach remains one of the best: Joe’s Stone Crab, opened in 1913. If you like your claws without the customary two-hour wait at dinner, an attractive option is Joe’s Take Away, an on-premises market ideal for diners who can consume their meal off-site.

Jewel of the Seas to homeport in Cyprus from July

Aida Cruises to return to European waters in September

MSC Seashore floats out in Italy