ABOARD THE VIKING SEA — Viking Cruises’ newest ocean
vessel, the 930-passenger Viking Sea, is the second in what will be a series of
six moderate-sized sister vessels. The first, the Viking Star, debuted a year
ago.

I have not seen the Star, but other journalists on the
Viking Sea inaugural who had sailed on the Star were lifting carpets and
flipping the chairs trying to uncover differences between the two ships.

OK, that isn’t literally true, but they were looking.
Erling Frydenberg, Viking’s owner’s representative, said there are operational
differences for greater efficiencies but they are not obvious.

A few details have been tweaked, with reading lamps added
to certain suites and more electrical outlets (European, American and USB)
installed in cabins. These changes are being made aboard the Star, as well. Due
to lack of demand, the barbershop was removed from the Star and, belatedly,
from the Viking Sea plans, replaced in both cases with a skin care salon.

Travel Weekly previously reported that a single reception
area on the Star was split into separate shore excursion and guest services
desks; that is the setup on the Sea, too.

The first ship launched Chef’s Table dining, which
includes wine pairings, built around five destination-themed menus that rotate
every nine days. The Sea changed that. Using seven such menus, it rotates them
every three days, providing foodies on a shorter cruise with more variety. Additional
menus and more frequent rotations will be introduced on the Star, too.

The Italian restaurant still serves Italian wines, but
for dining in the open-seating eateries, both ships now serve local wines
matched to destinations visited, rather than matching wines to menus. Also new
on both ships, the beverage program includes a unique cocktail for each
destination.

Further emphasizing the destination component of a Viking
ocean cruise, Frydenberg said the company, after hiring a historian, will
tighten up the lecture program for better destination treatment and eliminate
some unrelated topics, like the session on Frank Sinatra seen on the Sea’s
inaugural.

Although the ship accommodates 930, there were only 650
on the inaugural, intentional for the first sailing, according to Ralph de
Klijn, Viking Ocean Cruises’ director of hotel operations, to make it easier to
deal with unexpected problems. However, he said, after the first few days, the
start-up has been very smooth. “We have been very lucky.”

Overall, the ship, with clean and muted decor, presents a
pleasant and comfortable space for relaxing, partying and gearing up for the
next excursion. 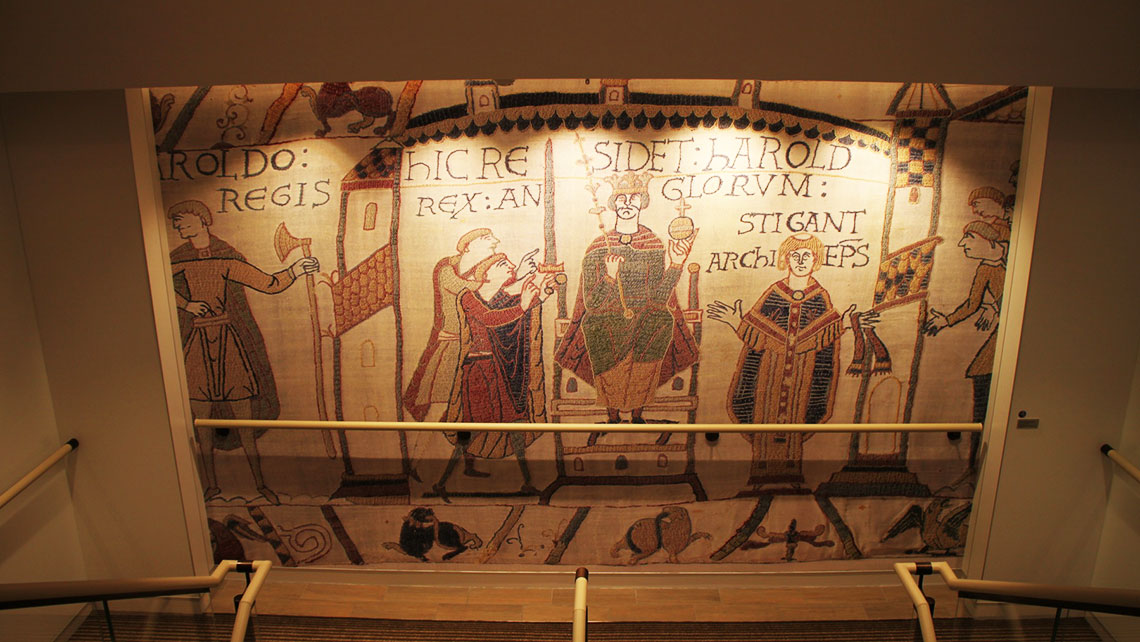 A reproduced segment of the Bayeux Tapestry decorating the stairwells aboard the Viking Sea. Photo Credit: Nadine Godwin

The stairwells on the Star and Sea are decorated with
reproductions of Bayeux Tapestry segments. The embroidered tapestry illustrates
the 1066 Battle of Hastings, in which William the Conqueror, duke of Normandy,
defeated King Harold for the English throne. The duke’s ancestors were Norsemen
(i.e., Vikings), hence the use of the tapestry images on Viking ships.

However, I spend extra time admiring the images because
King Harold’s full name was Harold Godwin. Sadly, the tapestry eventually shows
King Harold dead with an arrow in his eye. The Godwin clan’s hold on the
English throne lasted less than a year.

The Viking Sea floated out of Istanbul’s harbor on its
maiden voyage April 3. It will be christened May 5 in Greenwich, England.

Smoked on the water: Cruise lines bring BBQ out to sea