Virgin Voyages will design a beach club on the Bahamian
island of Bimini, and all voyages of its first ship, the Scarlet Lady, will stop
there for a daylong pool party, entertainment and beach experience.

The Beach Club will be located “a short transfer”
from the pier and will be built in partnership with Resorts World Bimini, a
750-acre casino hotel project that is owned and run by Genting Group.

The Beach Club will be designed by Virgin and built by
Resorts World.

Virgin Voyages guests will have exclusive use of the Beach Club when the
ship is in port. When cruise passengers are not on Bimini, the facilities will
be used by Resorts World.

Virgin pledges to create a destination
to rival the best beach clubs in Ibiza and Saint-Tropez, two high-end,
party-centric ports of call in the Mediterranean. It said an expansive
lagoon-style pool will anchor the club.

There will be six bars and complimentary, “thoughtfully sourced”
food with Bahamian flavors such as conch and mango salad, banana leaf-wrapped
queen snapper and Bahamian rum cake. A hammock grove will offer a spot to relax
beneath the palms.

Virgin said that while mornings will feature yoga and
meditation, “energy at The Beach Club will gradually be amplified as the
day progresses and turned back down as the dusk settles in.”

A day at the Beach Club will wind down with a bonfire on the beach.

It said the high point of the day would be late afternoon
when a DJ-led pool and flotilla party would be the center of the action. Later
in the evening, a beach bonfire and acoustical music will wind down the day.

It isn’t clear whether Virgin will share its facility with
Resorts World, or whether Virgin guests will have special access or privileges
at the casino. Genting owns the Star Cruise and Dream World cruise brands in
Asia, as well as Crystal Cruises.

Virgin also divulged details about its onboard
entertainment, which it calls Events & Gigs. It said it has developed a stable of producers, directors and
artists to include in its “Creative Collective.”

Virgin said it would forgo a traditional cruise director in
favor of a “dynamic group of individuals dedicated to making “happenings”
around the ship completely epic.

Shows will range from modern takes on classic stories, to
interactive dance parties and “off-the wall participatory acts,”
Virgin said, promising “experiences that will break down the fourth wall
and push the boundaries of traditional stage performances.” 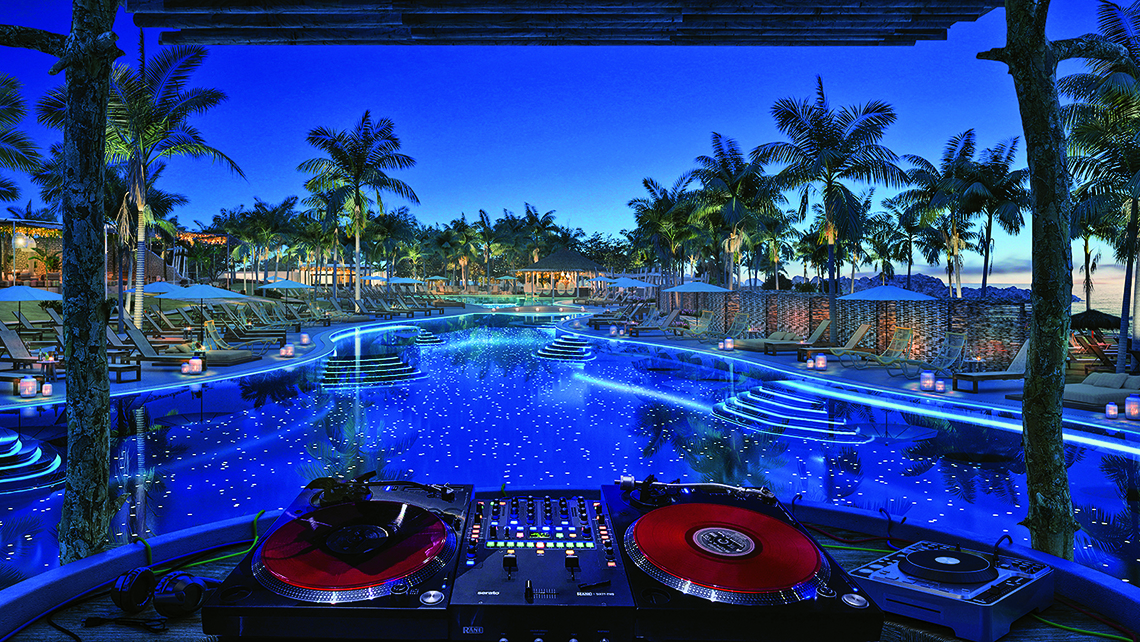 The Beach Club will feature a DJ-led pool party.

It said many entertainments will be staged in the Red Room,
described as “the first transformational multiform theater at sea.” The room will be capable of four configurations — a
traditional Proscenium stage, an alley stage used for fashion shows, a dance
flat-floor configuration and a “reverse stage setup.” Virgin said part of
the idea was to create completely different experiences for each day of the
cruise.

Six original shows have been developed. A show by
Randy Weiner, producer of “Queen of the Night,” “The Donkey Show” and “Sleep No
More,” will be announced shortly.

PigPen Theater Co. is responsible for Phantom Folktales, “a collection of song-driven micro-plays throughout the ship, that seemingly appear out of thin air, and disappear
just as quickly.”

Alternative circus company The 7 Fingers collaborated
in the development of “Ships in the Night,” which tells its story through the use
of cutting-edge digital projection “interwoven with the authenticity of
the human condition,” and “Duel Reality,” a take on Romeo and Juliet with
a modern twist featuring acrobatic storytelling.

Virgin Voyages picked
Valentine’s Day, Feb. 14, to fully open for bookings. It used the occasion to
announce the first voyage that will include its founder, Richard Branson,
who will host a four-day cruise to Havana to mark his birthday. The cruise
departs July 15, 2020. Branson turns 70 three days later.