The Tauck tour that has consistently rated highest in guest satisfaction is heli-hiking in British Columbia’s Bugaboo range, introduced in 1976. On the tour, guests of all ages and fitness levels are ferried by helicopters to walks and climbs of varying degrees of effort but remarkably consistent levels of pleasure and enjoyment.

Yet for some reason, it attracts so few customers that its future is in jeopardy.

There are Tauck tours with more luxurious accommodations, higher levels of gastronomy, greater exposure to native culture or natural scenery that is equally dramatic. This tour resonates with those who do take it, in part, because it tapped experiential travel before that label became trendy.

Relative to other Tauck tours and escorted tours in general, it has a heightened sense of participation. Guests don’t just look at scenery; they traverse a stunning landscape, with no other tour groups in sight. Regardless of age or physical ability, everyone ends the day with a sense of accomplishment.

And, no question, getting around in a helicopter adds both novelty and moments of exhilaration. The view of the mountains from the helicopter is part of the attraction, but there’s more: The protocol for boarding and exiting may require dramatic landings on terrain that’s not much wider than the copter’s skids, with guests huddled directly beneath the whirling rotors, waiting for it to land and pick them up.

Touchdowns, off-loading, on-loading and liftoff are typically all accomplished in a minute or less. Blades thunder above, and pressure is felt in passengers’ ears as they kneel below, steadying themselves against a buffeting downdraft.

Intense as that may sound, on a recent trip, guests in their 70s and even 80s enjoyed the experience and didn’t feel stressed or rushed. The process is done efficiently and calmly, led by experienced guides and pilots.

Helicopters are what differentiate heli-hiking from other hiking trips, and although guests indicate afterward that they find the flights enjoyable, some arrive with apprehension, which may discourage some from signing up. At the welcome dinner at the Fairmont Chateau Lake Louise for our group of 36, three guests admitted that the thought of being in a helicopter frightened them. 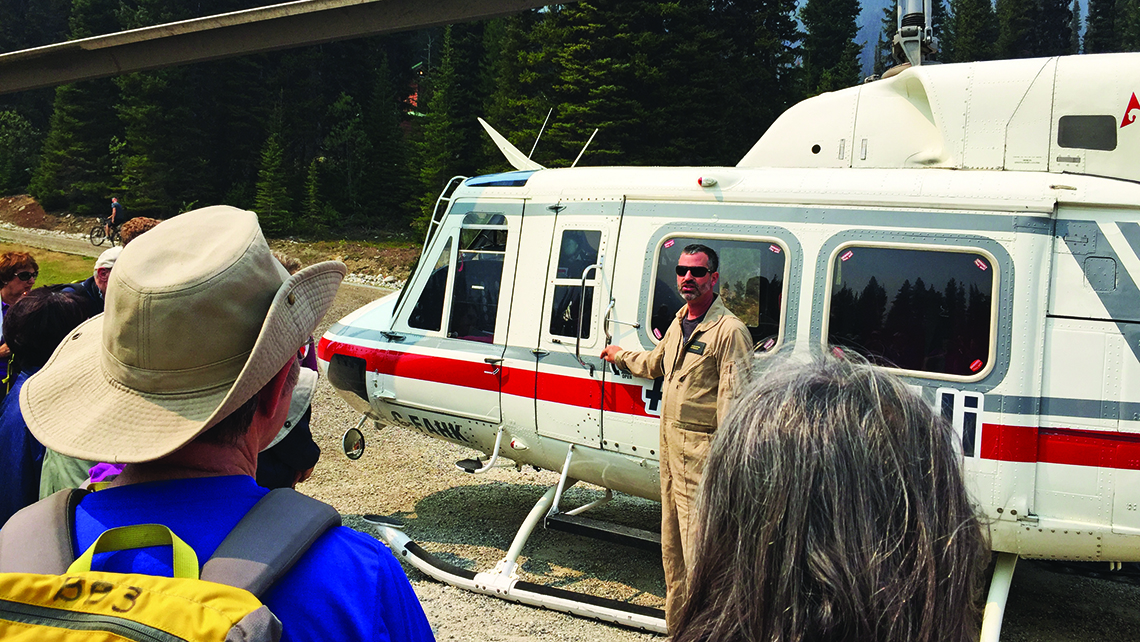 Hikers get a briefing on helicopter protocol and safety from pilot Matt Ellis before the first ride. Photo Credit: TW photo by Arnie Weissmann

Susan Reece, a private wealth manager in her early 50s from upstate New York, said her fear of helicopters dissolved on the first day.

She had previously taken a Tauck tour of Rome and said, “When I finished touring the Vatican, I felt I learned a lot. But after a day here, you feel euphoric.”

Reece had opted for the group that would be tackling the most challenging trails and after two days felt “a huge sense of accomplishment.”

The group had a wide range of ages represented, from a teenager (my 16-year-old son) to an 83-year-old on his 26th Tauck tour. The octogenarian, Ross Payne of Williamsburg, Va., said his wife was persuaded to sign up by their travel agent, whose partner had been heli-hiking 25 years earlier and said it was the nicest trip she’d ever taken.

Payne, who said he enjoys walking, hiked a week along the route of the Lewis and Clark Expedition last year, and although he took the afternoon off on the third day of hiking (“I don’t need to prove anything to anyone or myself”), he was delighted with the tour. 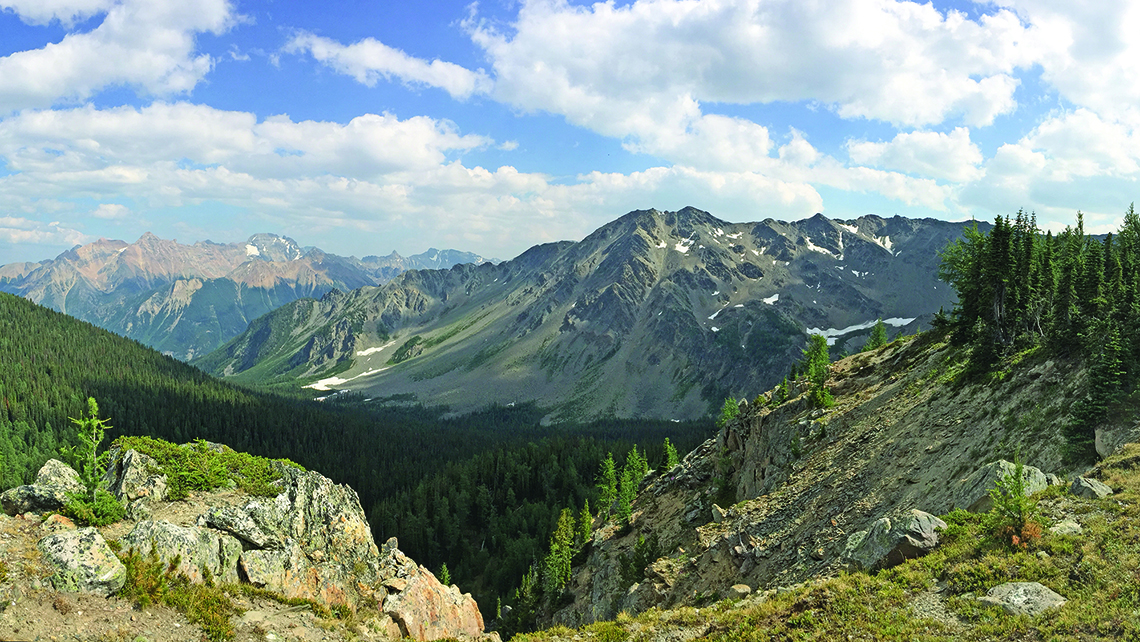 In a recent interview at his home in Connecticut, Arthur Tauck Jr. said of his heli-hiking tour in British Columbia’s Bugaboo, “I think this whole thing was probably one of the most rewarding things I ever did in my career.” Read More

The heli-hiking not only ranks highest for satisfaction among Tauck clients; it’s given special status by Tauck’s chairman, Arthur Tauck Jr., who turned his father’s motorcoach business into a global powerhouse. He was deeply involved in the creating the concept of heli-hiking, and it remains his favorite among Tauck’s 100-plus programs.

Since its launch 40 years ago, Tauck’s heli-hiking has kicked off with a two-night stay at the Chateau Lake Louise, beautifully situated on a glacial lake in an area riven with hiking trails and spectacular views.

The morning after arrival, the group took a walk along the lakeshore with a theatrical local guide, Nadine Fletcher, who deepened guests’ understanding of mushrooms, glaciers and ground squirrels, among other natural phenomena. (Although the group passed through bear and mountain goat country on the trip, the largest mammal anyone saw was a marmot.)

The afternoon was left unscheduled. While many guests anticipated their first helicopter ride the next day, Aeri Yun engaged in her own first: hiking. The 45-year-old real estate financier from Queens and her 43-year-old sister, Juri, a Manhattan fashion designer, joined the trip on the advice of their parents, who had experienced it in 1999.

“They said this is the one trip you need to take before you die,” Aeri Yun said.

She admitted she hadn’t been to a gym in 25 years, and during her first hike at Lake Louise, “I literally thought my heart would stop. But then you get there, you think it’s so worth it. It’s breathtaking.”

Two days later, she was climbing a 790-foot rock face via ferrata. “I was nervous about whether I’d have the strength to climb it,” she said, “and I was concerned about looking down or finding a hold.”

In the end, she said, “I saw things I hadn’t seen, did things that I didn’t think I could do, would do or should do.”

Sister Juri said her most vivid memories might be tied to the helicopters.

“We’ve been in a lot of helicopters, but never like this,” she said. “Just to hear the engine as it’s coming, see the blades whirling and you’re down on one knee, feeling the blast of wind. It’s this intense experience of being alive.”

Upon arrival at the Bugaboos Lodge, guests receive a helicopter orientation that is considerably longer and more interesting than any airline safety video. I made a note: “Don’t exit and move uphill if the blades are still turning.”

On the first day, my son and I joined the wealth management consultant Susan Reece; her husband, Tom Hirt; and chief mountain guide/lodge manager Dave Cochran in a group that was looking for the most challenging hikes. We followed ridges up to 8,600 feet. Smoke from wildfires put a gauzy haze on the views, but the experience was vibrant nonetheless. 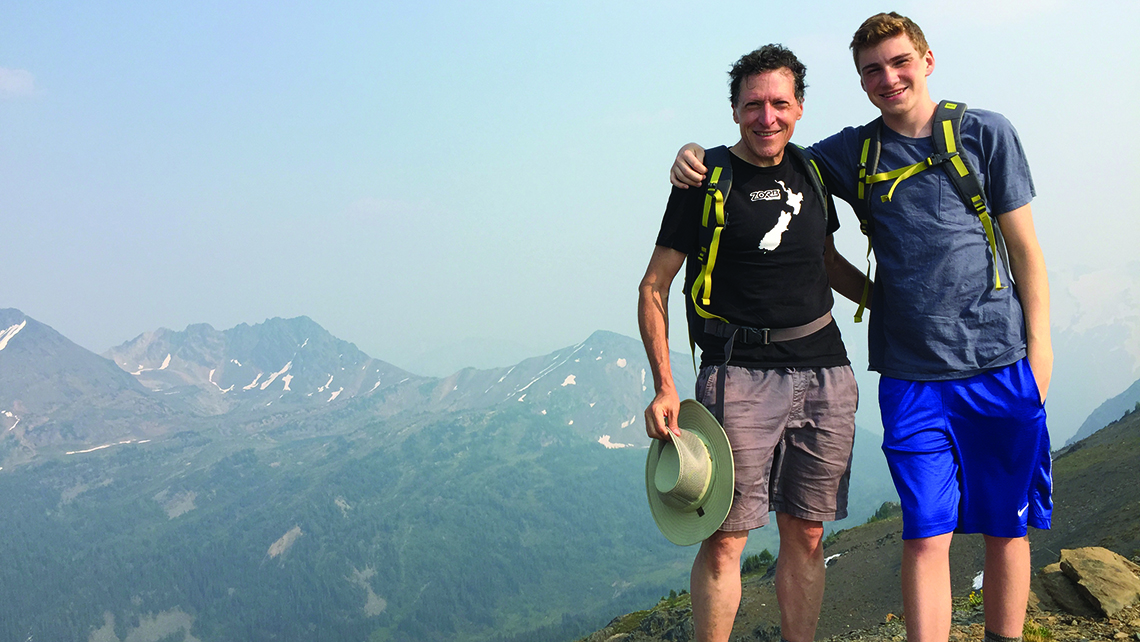 The writer and his 16-year-old son commemorate reaching the highest point of a challenging hike with a photo. Photo Credit: TW photo by Arnie Weissmann

Cochran pointed out a pit where a grizzly had dug out some ground squirrels; we “skied” down snow that turned pink in our wake and actually smelled similar to watermelon, the color and smell both due to algae in the snow.

We opted to go an extra couple of hundred yards along a ridge beyond where the trail ended, bringing us to a narrow point just wide enough for us to huddle beneath the helicopter as it landed for a dramatic end to the first day’s hike.

To get the full range of experiences, my son and I subsequently joined other groups, including the most leisurely paced as well as an intermediate group.

The skies gradually cleared of smoke so that each day had crisper views than the previous. With the exception of biting horseflies — mostly kept at bay by repellent or wind — these were as pleasant a mountain stroll as one could imagine, through fields filled with wildflowers, crossing narrow streams, enjoying incredible panoramas.

Among those in the intermediate group were Marty and Rhoda Bress of Gilroy, Calif. They had been on three previous Tauck tours, and Rhoda was drawn in by the brochure notes indicating it was Arthur Tauck Jr.’s favorite trip. 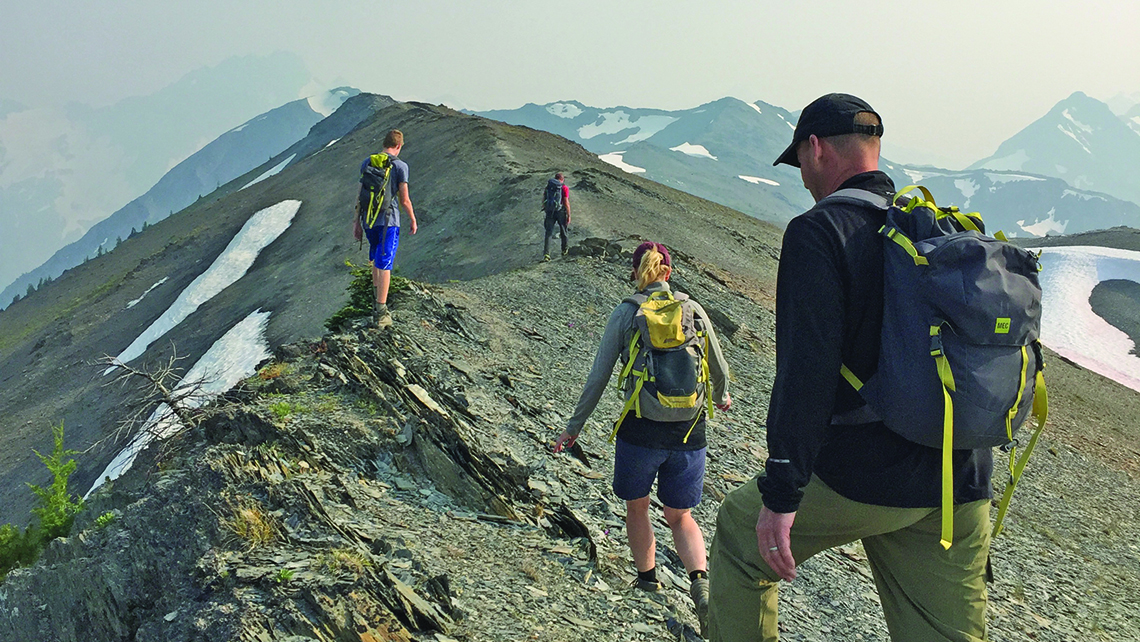 The most ambitious group headed across ridges at an altitude reaching 8,600 feet. Photo Credit: TW photo by Arnie Weissmann

For Marty, 71, it seemed the perfect level of activity. Other tours they looked at, he said, seemed too passive. But he also acknowledged it was unlikely he could have hiked up to the trailheads where the helicopters dropped off guests to begin the walks, then still have the endurance to hike for hours more.

He described what he came across while hiking as “spectacular.”

“We saw huge fields of wildflowers,” he reported. “It was as if someone had arranged them perfectly, all in a bouquet.”

In the evenings after dinner, many guests headed back to their rooms, but for those with a bit more energy, there was ping pong, a pool table, a library, an indoor climbing wall and massage therapy available at the lodge. A cash bar provided a venue for post-dinner mixing. WiFi was available, but there were no TVs in the rooms (or locks on the doors).

The sense of camaraderie that impressed Arthur Tauck Jr. impressed me, as well. Sharing the beauty of the mountains, the rhythm of the trail and, importantly, the sense of accomplishment at the end of the day creates bonds. I was especially happy that I had the opportunity to share all this with my oldest son before he enters his final year of high school. 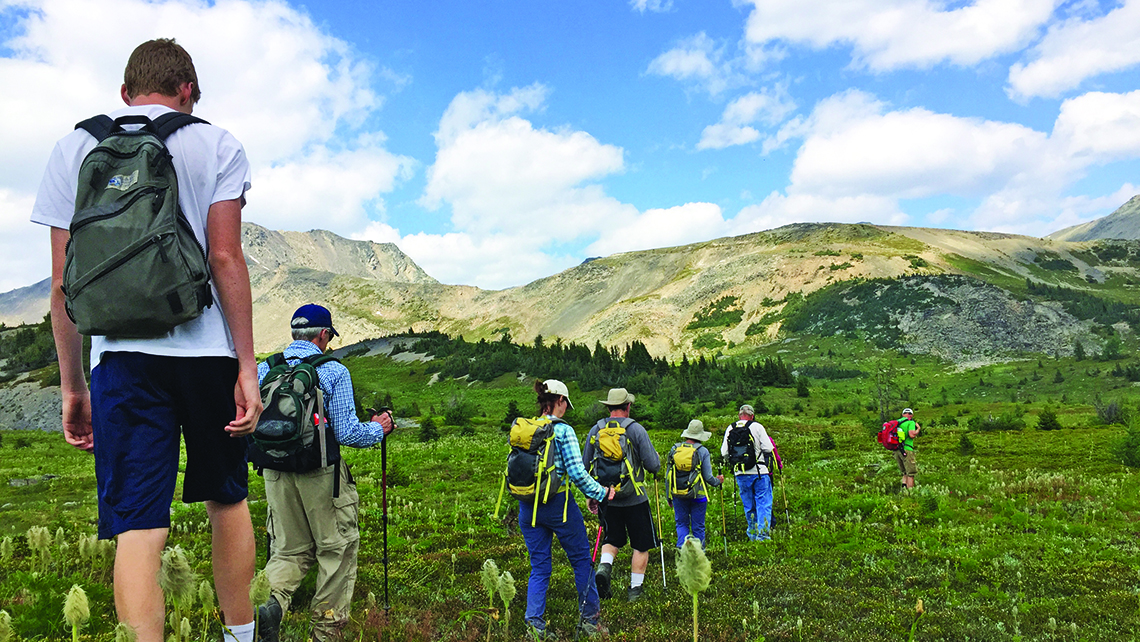 In addition to dramatic high-country views, the hikes wound through bucolic meadows where wildflowers were abundant. Photo Credit: TW photo by Arnie Weissmann

The Bugaboos got their name because, although the geological conditions that created them usually also produce valuable minerals to be mined, the miners who were lured there left disappointed. Mysteriously, the mountains were merely a “bugaboo.”

The miners’ loss was a hiker’s gain. Had they found mineral wealth, the area would no longer be pristine.

But there’s still a mystery tied to the Bugaboos. Today, they are anything but disappointing for visitors. What’s confounding is the mystery of why this particular program remains on Tauck’s endangered list.