BREMERHAVEN, Germany — Norwegian Cruise Line on Thursday took
delivery of its 15th ship and the first built for the Chinese market.

“Norwegian Joy’s delivery is an exciting milestone for
us, signifying our official entry into the Chinese cruise market,” said
Andy Stuart, president and CEO of Norwegian Cruise Line. He thanked builder
Meyer Werft for “another wonderful ship.”

At 167,725 gross tons and carrying 3,883 passengers at double
occupancy, Norwegian Joy is the sister of Norwegian Escape but with some key
differences.

Among the new features are the first racetrack at sea, a
sophisticated virtual reality zone, a laser tag course, tearooms, multiple
casinos and family accommodations that sleep up to six
people.

The Haven by Norwegian, the line’s luxury suite complex, for
the first time has an Observation Lounge featuring 180-degree views. Also new
is a Concierge level that provides another VIP experience with its own ample
Observation Lounge and larger balcony staterooms.

Among the 28 dining venues are Norwegian standards like
Cagney’s Steakhouse and the French Le Bistro. Two restaurants have round tables
equipped for Chinese hot pot or Korean barbecue.

In customizing for the Chinese market, Norwegian tapped
consultants and did extensive market research. “We’ve really worked hard
to do this right,” Stuart said. “We’ve tried to be thoughtful and
appropriate. This is not a tweak.”

David Herrera, China president for Norwegian Cruise Line
Holdings, said Norwegian Joy combines the best of the East and the best of the
West. He praised the “beautiful finishes, decadent suites and outstanding
design.”

The 787-foot racetrack zigzags across two upper decks. Ten
electric go-carts dressed up like sports cars can race at the same time. After
three minutes, the fastest clocked speed wins.

There are more racing possibilities in Galaxy Pavilion, the
virtual reality zone, where passengers can climb into an original 2009
Williams, a Grand Prix race car, put on Oculus goggles and experience the
sensations of Formula 1 competition. 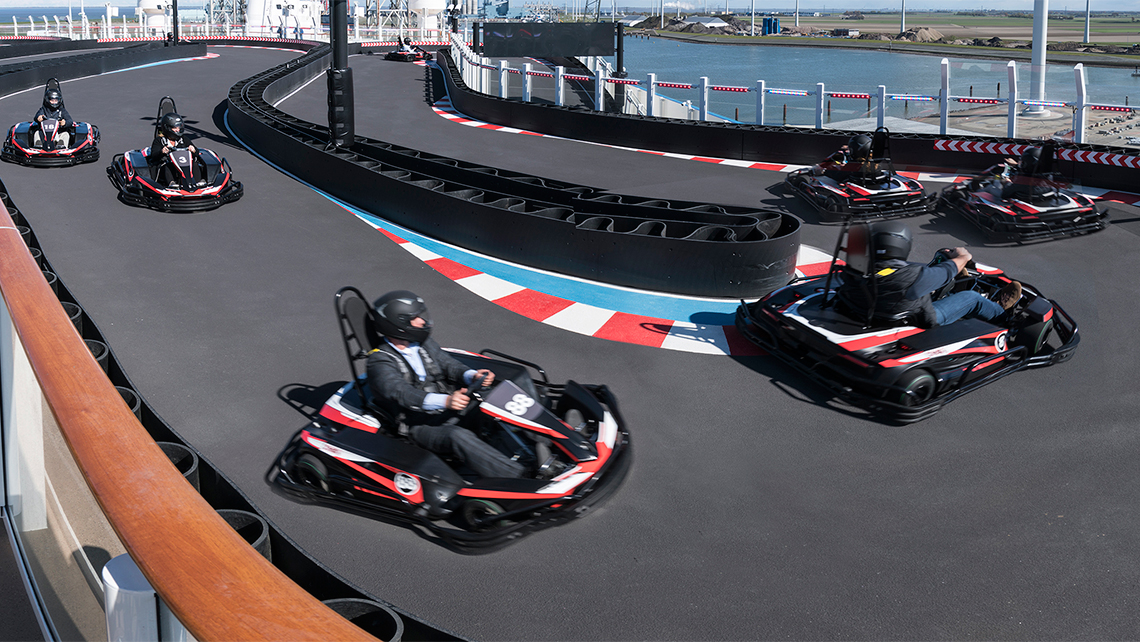 Far tamer, but fun for kids, are the bumper cars. Passengers
can also virtually pilot a plane, go hang gliding, shoot Zombies in a 7-D room
and walk a plank that appears suspended terrifyingly high in the sky.

“It’s really cool. It’s different. I haven’t seen
anything like it,” Stuart said.

The company hasn’t disclosed which of Norwegian Joy’s novel
features may be aboard next year’s Norwegian Bliss, set to debut in Alaska
before settling into year-round cruises from Miami.

Following the ship’s naming on June 27 (Chinese pop star
Wang Leehom is the godfather), the Norwegian Joy will sail from Shanghai and
Tianjin.