In my wife’s and my case, at least, he was wrong. The first stop for Princess Cruises’ new culinary-themed sailing would be Santa Barbara, Calif., our hometown. Suzanne and I had driven 120 miles for a San Pedro boarding and a seaward return home on Princess’ launch of a four-day cruise between Santa Barbara’s “American Riviera” and Ensenada’s Mexican Riviera.

“Passenger research shows trying new food at the top of the list,” noted Tracy Diaz, manager of domestic products for Princess Cruises. “And California scores high,” even though many short-trip passengers hail from the Golden State.

Consequently, this trip would manifest Princess’ drive to “create new and exciting culinary-focused shore excursions as well as locally inspired and authentic culinary experiences onboard.”

Princess’ Santa Barbara excursions feature walking, bike and bus trips throughout the city and neighboring Montecito and up to the southern edge of Central Coast wine country. During our quick outing, panoramic views from the roof of the Santa Barbara County Courthouse conveyed the loveliness that lures people here. But even as the city’s pink-columned, white-brick mission shone against a blue sky, our media group was ready for its first foodie exploration.

Downtown’s Public Market has experienced churn amid its upscale stalls, but Corazon Cocina was busy when we visited the clean, well-lit space it’s occupied since 2016. A crispy, surprisingly delicious cauliflower taco with radish flower, dates and nuts was worth the wait. The meat in the white beans and beef taco tasted good, but I just picked at it. Ours was a food marathon, not a sprint.

After an hour’s bus ride, we reached Los Olivos and Saarloos & Sons, a winery whose vintages are available only through the brand. “Wine is communion, wine is community,” proclaimed Keith Saarloos. His grenache blanc was as smooth as a prayer, and trademark cupcake accompaniments (“a snob deterrent,” he said) provided a tasty point of difference.

A culinary-themed cruise aboard the Ruby Princess sails between Santa Barbara, Calif., and Ensenada, Mexico.

Our sail to Ensenada debuted a campaign that’s rolling out to all of Princess’ California-Mexico cruises. Celebrity chefs are providing favorite Mexican recipes, and a new corporate chef will define a Latin cuisine going forward. A Mexican buffet will become standard in the Ruby Princess’ Horizon Court. And a worldwide portfolio of Bon Appetit shore excursions already includes a Salsa and Salsa dine-and-dance opportunity for Mazatlan: half-day lessons preparing two types of salsa and margaritas, plus a chance to learn some upbeat steps.

With daughter Mariana translating, Sabina blended crab and shrimp; veg-all and vegetable oil; celery; mayonnaise; garlic; guajillo chili and chili powder; lemon juice; and salt into a signature dish served on a corn shell. Sabina’s prowess has led celebrity chef Anthony Bourdain to celebrate the smiling “Queen of the Cart” for serving “the most mind-blowingly fresh, sophisticated and colorful tostadas imaginable.” Bandera would encore with a salsa-making demo on the Piazza deck.

Carlos Salgado, chef/owner of Taco Maria in Costa Mesa, Calif., then offered up scallops in aguachile. Marked by Hokkaido scallops; serrano chilis; lemon, lime and orange juices; grapeseed oil; cucumber; purple onion; sugar; and sea salt, this dish is slated for the Crown Grill, one of the ship’s specialty restaurants.

Completing the panel was Bill Esparza, author of “L.A. Mexicano” and Princess’ partner in launching this program. Some of Esparza’s dishes also will appear on future Ruby Princess menus; for now, he distinguished himself by explicating various types of tequila during a small-group session at Vines, one of the ship’s many bars. This Tequila Tasting also will be ongoing.

While not Mexican-themed, a bonus Old World vs. New World Wine Tasting took place in Curtis Stone’s wood-and-glass Share restaurant. Curator Jeffrey Merrihue is an executive by day, but the founder of XtremeFoodies confessed to spending his earnings to merit billing as “the only person in the world to have eaten at all of the world’s 50 best restaurants six years in a row.”

Over three pairings, Merrihue asked us to identify which countries produced the most satisfying roses, chardonnays, Puligny-Montrachet and cabs he proffered. Many reasons were offered, some were correct and little wine was left behind.

We returned to Share to punctuate our palates with an excellent six-course extravaganza. Amid the starter, salad, pasta, sea, land and dessert dishes, Suzanne loved the lamb loin with couscous coated in spiced almonds and lime yogurt. I very much enjoyed the salt-cured duck leg confit with bacon-flavored beans and Parmesan. 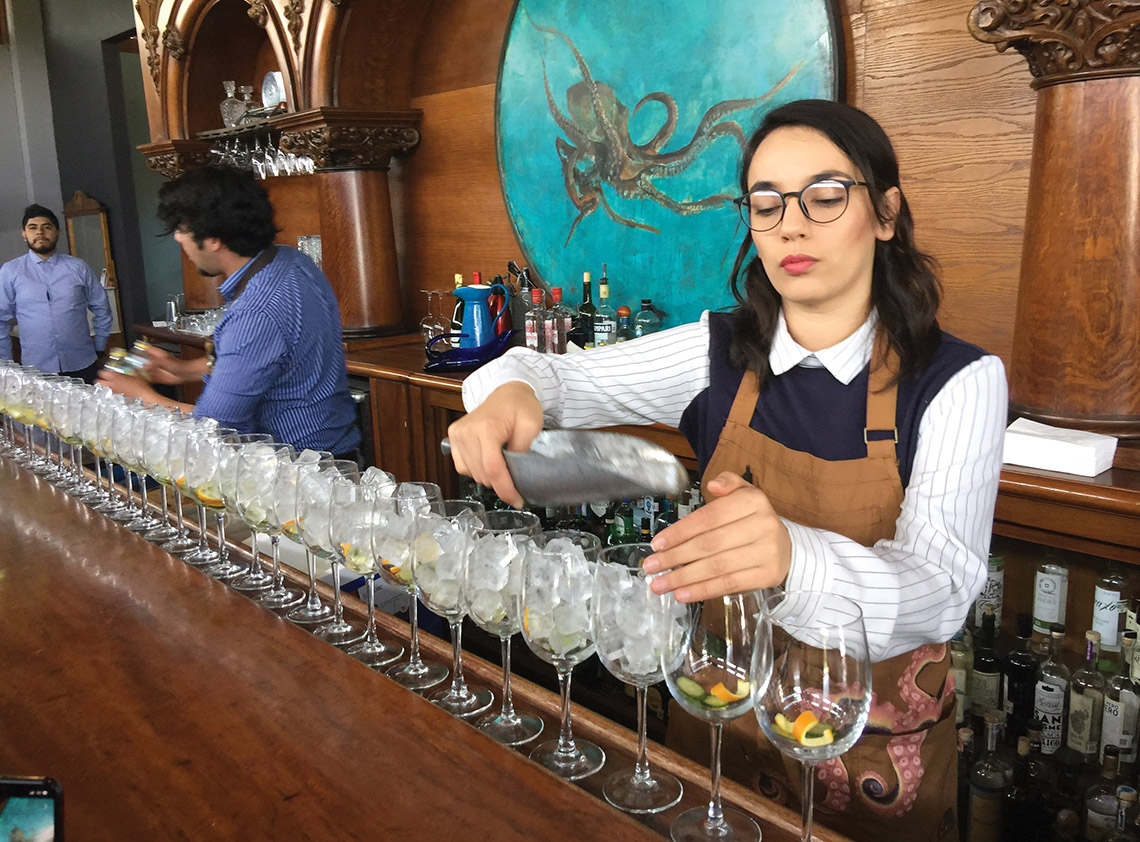 The bar at Manzanilla in Ensenada, Mexico, among the stops on a Ruby Princess sailing. Photo Credit: Abe Peck

Sunday’s food fest began with a tour of the ship’s spotless galley. Amiable chef Antonio explained how 150 fellow cooks work without flame to meet all dietary requirements. He and Suzanne engaged in a deep discussion about chicken soup preparation.

Disembarking, it was zero hour for sampling Ensenada’s seafood prowess — after all, fish tacos are said to hail from here. Princess offers land, water and folkloric experiences in and beyond this seaport of a half-million people; our culinary safari took us to four restaurants plus a wine-tasting room.

In sequence, here are “bests” from what our guides’ sign christened the Ensenada Local Food Crawl.

• Most Relaxed Setting: At Boules, Javi and David Martinez’s delicate steamed mussels with Argentine-style sausage slices were as mellow as the restaurant’s woodsy outdoor space.

• Overnight Success (after 42 years): In 1976, Sabina Bandera began her professional food-cart cooking in Ensenada. Numerous accolades later, we found son and chef Luis Edgar happily fending off crowds at the legendary La Guerrerense corner cart while Sabina and her staff worked down the block, behind the counter of her brightly colored, 2-year-old, sit-down Sabina Restaurante. Daughter Mariana, who spends most of her time growing a branch of the eatery in Mexico City, was here, too.

Fun, casual and affordable, restaurant and cart feature staple and exotic ceviches, tacos, sopas, salsas and tostadas especiales. A delectable Pacific trio included sea urchin and sea snail tostadas and a tuna ceviche. The sea snail was my favorite, suggestive of abalone. I’d sat with the Bandera family for an onboard dinner, and it was sweet of Mariana to greet me with a smile and a hug: “Now you are in my place!”

More than satisfied, our group returned to the Ruby Princess. After a day spinning around what seemed like a giant seafood Lazy Susan, it was a miracle we didn’t have to be winched back aboard.

Princess Cruises getting new ship in 2020